Treatment Facility Was Officially Flowing Water, Free Of PFCS Into Distribution System on May 4 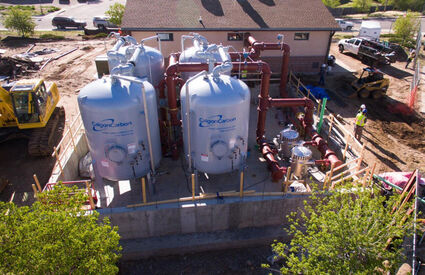 In May of 2016, the EPA lowered and combined the Health Advisory Limits on specific types of Perfluorinated Compounds (PFCs), putting almost half of Widefield Water and Sanitation District's (WWSD) water supply over the new advisory level.

Even though these PFCs are unregulated and unenforceable by the EPA or State, WWSD wanted to act as fast as physically possible, so consumer confidence would be maintained. In June, WWSD's Board of Directors gave District staff the approval to move as fast as possible to get PFC Treatment piloted, designed, and constructed before high water demands of 2017 arrived.

With our experience in water treatment, WWSD and our engineers (JDS Hydro), made the decision to also evaluate Ion Exchange (IX) as a viable option for PFC removal.

In October, after much research, WWSD began piloting and tracking four IX resins and one GAC media to determine which would be best suited to treat WWSD's water quality. The United States Air Force (USAF) met with WWSD in July to discuss their $4.3 million in Rapid Response funds and WWSD's requirements to meet peak summer demand. We requested treatment units that could treat up to 1500 gallons of water per minute. The USAF was preparing to supply Granulated Activated Carbon (GAC) treatment vessels as that was/is considered the Best Available Treatment for PFCs in the country. However, WWSD's past experience with GAC plants caused concerned about using this technology for our specific source water.

While tracking the PFC removal of these five pilot systems, WWSD had to decide, by early January, what type of vessel would house the undetermined filter media to ensure their arrival and installation by the May 1st deadline. WWSD also had to find a contractor with the ability to construct the budgeted $2.5 million project. After an intensive evaluation and selection process, WWSD selected Velocity Plant Services on February 28th, 2017, to construct our new plant.

Velocity Plant Services committed to having treatment ready by May 1st, despite the plant design only being 50% at the time Velocity was selected. By April, we were tasked with purchasing filter media in order to meet the deadline. Our engineers and I (Brandon Bernard) analyzed six months of pilot data to determine which filter media would be the Best Available Technology for treating PFCs. When it was clear that IX displayed the best performance, WWSD decided to keep the analysis on-going by selecting two separate IX resins to be used in the new treatment facility.

The resin was delivered May 1, and the treatment facility was officially flowing water, free of PFCs, into the distribution system at 1:30 p.m. May 4.

WWSD is currently in discussion with USAF on how to receive $850,000 as part of their available Rapid Response funds. WWSD has paid for the entirety of this $2.5 million project and did not raise customer rates in 2017 to pay for the project.

This Treatment Plant successfully met our deadline due to the dedication of all the parties involved. This project was only possible with the support of the District Board of Directors, WWSD's management team, WWSD's operating personnel, the dedication and ability of JDS Hydro, and the perseverance and competency of Velocity Plant Services.

Widefield Water and Sanitation District kept its promise to their customers by becoming the first Public Water System in the United States to treat PFC's with Ion Exchange Technology, and before the summer of 2017.