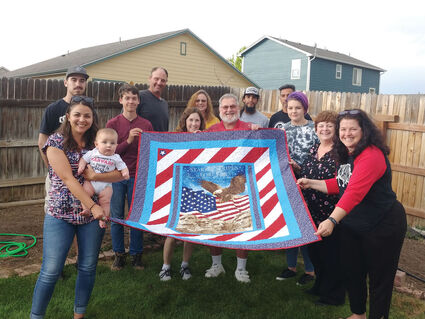 As more and more family members arrived at his home one recent evening, Fountain resident and community volunteer Rick Clements couldn't quite figure out what was happening. When I arrived, it really threw him for a loop. I asked if he had any idea why his large family was assembled and he said he was clueless. After some thought he shared, "it did cross my mind that maybe I was getting a new grill."

Moments later, family members from out of state came through his door shocking him further. Within seconds he would see what all of the excitement was about.

This Vietnam Vet, who like most, didn't receive a cheerful welcome home after the war, was surprised with a beautiful Quilt of Valor. Carol Ingram, who traveled from out of state to make the special presentation, read the following about the special honor:

"I am Carol Ingram, and I represent the Quilt of Valor members and volunteers all across America. I am humbled to stand before you today to award this Quilt of Valor to Rick Clements.

The Quilt of Valor Foundation was founded in 2003 by "Blue Star" Mom Catherine Roberts, whose son was deployed as a 'gunner' to Iraq. She wanted to comfort him and thought of no better way than to make him a quilt, thus Quilts of Valor was born. Since that day, there have been 222,421 Quilts of Valor awarded to service members and veterans who have been touched by war.

The top of the quilt with its many colors and fabrics, represents the communities and the many individuals we are.

The batting, or filler, is the center of the quilt- it's warmth represents our hope that this quilt will bring warmth, comfort, peace and healing to the veteran who receives it.

The backing is the strength that supports the other layers. It represents the strength of the recipient, the support of his/her family, our communities, our nation.

Each stitch that holds the layers together represents the love and gratitude of the maker.

On each quilt there is a label, showing that this Quilt of Valor belongs to you! There is also a star on your quilt that was originally destined for a flag, but because of its slight imperfections, was given to us to sew on your Quilt of Valor.

On behalf of the Quilts of Valor Foundation and a grateful nation, we thank you for your service to our country with this Quilt of Valor Award!"

Clements, who was born in Indiana and then spent some of his childhood in Michigan before moving to northern California, said he remembers completing the physical for the draft there, but then he left to come to Denver to live with family. He related how, when his mom contacted him to say he had received a draft notice it the mail, he told her don't open it, as he was working in Denver and didn't want to leave. Next his mother phoned that the sheriff was looking for him regarding the draft so he went to a recruiting office in Denver to enlist in the Army. He was 20 years old. He completed basic training at Fort Bliss, Texas and went to engineers' school at Fort Leonard Wood Missouri. Then he went on what he referred to as his "senior trip" to Southeast Asia... to Vietnam.

He explained that he was never in a combat role; he was always in a support status. He shared that for every fighting soldier there were usually five support people assisting from the rear echelon. He spent some time loading ships, then transferred to an outpost away from the action. He had training in mechanics so he was then sent to another unit-the 11th Transportation Battalion where they off loaded all of the ammo for the 3rd and 4th corps areas. They put it on barges and boats and delivered it to different regions taking them into very dangerous territory.

"The rivers were like snakes, and we would have like 20 to 30 barges hooked together with a tugboat," he recalled. "Going around the bends it was like a horseshoe, and the Viet Cong could be awaiting around any corner to ambush them to try and steal the ammunition, to use against Americans. They were shot at and he lost friends there. He remembers being told that if the ship took a direct hit at the delta in the river, it would have been the equivalent of an atom bomb going off. "We lived with that fear constantly," he said.

He returned to America (to San Francisco) on a significant date in history-July 20, 1969 (the date of the moon landing.) He was 22 years old and was a much different man. After 18 months there, he was stationed at Fort Meade, Maryland.

"There I was fortunate enough to be put into work with recreation services," he shared. He helped other soldiers by training and teaching them how to repair cars.

Soon he and his young family went to Germany where he continued to rebuild engines until he was able to work his way into other recreational services including setting up sports events for the troops to include horseshoes, basketball, football, tennis, bowling and more.

"We had six companies on our ball fields," he shared. He recalls the thrill of finally winning the Commanders Cup after always taking second place.

His commander had to make a trip from Germany to Denver and asked Rick to accompany him. It was there he was surprised to receive the Commanders Cup honor.

Next he became further immersed in recreation services itself, overseeing numerous sports. He took pride in finding the best officials and teams "we always had the best," he said smiling. He always made sure to have plenty of hot dogs, hamburgers, sodas and more for the officials who worked for him.

When he arrived in Colorado he was put into a tank battalion as a mechanic. He went to Korea for a year with a military intelligence unit which was very rewarding. He said that had a much better feel than when he was in Vietnam.

"One of the things I'm most proud of is while I was in Korea I was also officiating high school basketball and football. There was a special event that I was asked to join the crew to officiate a college game of American type football between the University of Seoul and University of Japan," he shared. "We were not paid for this game. They did invite the crew to the celebration dinner. To our amazement we were honored at the dinner, being sat at the head table and each of us were given plaques and other items to commemorate this historic event. That will always be the highlight of my officiating career" he said.

Clements also worked as an Army recruiter for four years at a Colorado Springs office.

When he retired from the Army in 1987 he was an E7, Sergeant First Class.

He came to Colorado Springs and started a new career, driving tractor/trailers. He said he has been on the road to all 48 states and Canada. He did this for 15 years.

He recalled being in Maplewood, NJ where he had just offloaded empty cans for Arizona Tea and he had to go pick up a load outside Trenton, NJ. As he was traveling east on Hwy. 78, the date was September 11, 2001 and he saw the first plane hit the World Trade Centers. He said the Jersey turnpike was filled with traffic that stopped to see what was happening. He remembered calling his daughter and a few minutes later she called back to say the second plane had hit the towers.

He said that made him want to get off the road. He then became employed by a truck driving school.

He recalls putting something on social media saying "If you don't love Jesus Christ and put him first in life, don't reply." This would be how he would come to meet a friend, Karen, who later became his wife. After participating in a life-changing workshop that changed his relationship with Jesus Christ, and through a lot of prayer he felt ready to meet his new friend. He asked her to pick him up at the airport and then told her he would like to court her. Village Seven Presbyterian Church was having a musical and a prayer focused event so they went there and that was the start to falling in love. Then, one day, he called her and said he had broken down on the interstate, asking if she would come get him. Really, he was outside of her home hiding in the bushes with a big Tigger stuffed animal. As she came out he appeared and asked her to marry him. The two became one on Jan. 25, 2002.

He was pretty impressed with how well his bride of 17 years was able to keep his Quilt of Valor presentation a secret.

Clearly overwhelmed by the honor he said he really didn't feel deserving of it. A lot of different emotions and memories flooded his mind as he thought of others who were affected by Agent Orange, and combat soldiers who suffered PTSD. He remembered how he and his fellow soldiers were spit upon and called baby killers when arriving at Travis AFB.

The Clements came to Fountain when they were looking for a new home in 2006. Locally he worked as a bus driver for School District Eight and when the Fountain Transit program began, he started driving for them until he retired. 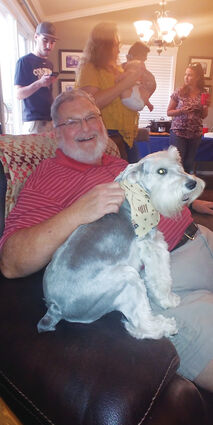 Rick Clements with his dog Molly, awaiting a surprise he never expected.

An active community volunteer, he regularly attends Fountain City Council meetings and serves on its recreation task force (he is the head of the outreach committee that will soon be making presentations to various groups and interested parties.) He sees building a recreational facility for the Fountain Valley as a big challenge, but there is a big need for it, for every age from children to seniors. He believes it will draw the community together.

He is also on the city's Parks and Recreation Board. He has participated in local veterans events and is a member of The Retired Enlisted Association. He is also an Elder at Widefield Community Bible Church.

For fun he enjoys daily walks with his dog, Molly, and said he and Karen enjoy weekend jaunts of travelling and also cooking together.