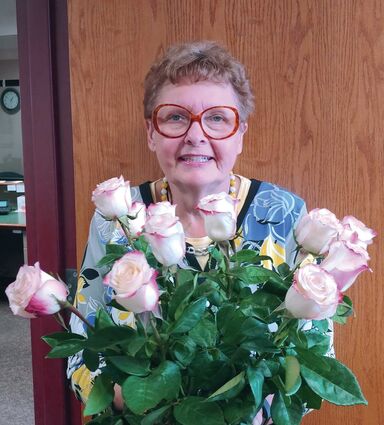 Grand Marshal Connie Sanford with the roses she received from Fountain's Office of Emergency Management Director Luchia Tingley congratulating her on the honor.

Long-time City of Fountain Executive Assistant to the City Manager Connie Sanford got the shock of her life Friday, Aug. 16. She was spoofed by City Manager Scott Trainor, who told her she had to be back from lunch exactly at 12:30 p.m. to hand an envelope to a citizen who was coming in at that time as he couldn't be there.

"Of course I went to lunch at 11:25 a.m. and returned at 12:25 p.m. to ensure I would be here at 12:30 p.m.," the always prompt dedicated professional said. "At 12:28 p.m. the city manager entered my office, threw the envelope in the trash and said with tone 'they're not coming for this,'" which left her a bit perplexed. Then, at 12:30 on the dot, several people including the city manager, entered her office.

"I was speechless and had no clue what was going on. After a lengthy speech by the Chamber President Tom Downing, I was told that I was selected to be the Parade Marshal for this year," she shared.

Her first reaction was total shock. "I was speechless with tears in my eyes. I was stumbling to say anything," she recalled. "This means so much to me. I am a 'behind the scenes person' who does not like a lot of attention. Now I'm getting it," she added.

She has enjoyed interacting with city employees and the citizens, helping and assisting any way she can.

Sanford said she feels so fortunate to have worked here for 25 years and to be involved in the community. "As I think about it, I do know lots of people and have lots of history with the city. And I am so grateful to all those who were involved in the selection process to include the HR Manager Janette Arellano who nominated me. Now I know that I have left an impression on this community," she added.

She has seen a great deal of change from her early years with the city to present day, including when the old city hall was torn down (it was formerly used as apartments), to seeing the new City Hall built in 2001. The number of city staff members has grown a great deal since her first days with the city.

Sanford was born in Muncie, Indiana-home of Ball State University. By the time she was 4 years old, her family moved to a small town of 8,000 people, Hartford City. She graduated from the Blackford High School in 1970, and went on to Ball State University to get an Associate's Degree in Secretarial Studies (she said she is sure this degree no longer exists).

She is the eldest of four siblings Cathy, Carl and Carla, who are all still living in Indiana. Sadly they lost their parents at early ages: mother at 53 and father at 66. This year, she reached a milestone-she is now 67 years old and said she plans to live to a 100 and "get even with my two children."

But truly she wants to set an example for her children and siblings that you can live a long and happy life by staying active, eating healthy, and exercising. "So I will be 100!!" she confidently stated.

Both of her children graduated from Fountain-Fort Carson High School in 1997 and 1998. Daughter Dawn lives in Louisville, KY, while son Nick and wife Brittani and their son, Anthony, live in Birmingham, AL.

They lived in Colorado Springs for two years, and then purchased a house in Fountain. In 1979 they moved on to his next assignments in Germany, Fort Leonard Wood, Missouri, and Fort Knox, Kentucky; while renting out their home here until his retirement in 1992.

"Unfortunately, we divorced in 1998 after 25 years of marriage," she said.

As the Executive Assistant to the City Manager her duties are many. When asked to share more details she replied, "You name it! I plan several events as the biggest duties. Then I never know what I will be 'voluntold' to do. I thoroughly enjoy having something different to do all the time, and love the surprises and challenges presented to me. A few years ago I was given a new name tag for my desk 'Persistent Assistant' because I stay on top of employees reminding them of deadlines for trainings, reports, etc." she added.

Regarding what she is proudest about regarding her many years of serving in the city she said it would probably be being a part of the 2002 All-America City competition and winning.

"That was quite an undertaking to be involved in preparing for the competition in Kansas," she said.

Soon life will be changing for Sanford, her retirement date will be Jan. 3, 2020. She said she has no set plans yet, she will figure it out once she is retired.

"I promise you this---I will not be sitting in a rocker. I will be active and busy and wondering how I had time to work," she assured. "Right now I want to concentrate on wrapping up my 25 years with the city and passing the torch onto my replacement, Lexi Lee, who currently works for the Water Department.

"She will excel in this position and take it to the next level with her skills and energy," she said.

A long-time resident of Fountain she said what she loves most about living here is the small community feel and the low crime rate, and the great weather (we are the banana belt of the Fountain Valley.) She also loves the diversity of the community.

When not busy at work or volunteering her hobbies include walking, playing pinochle and thrift shopping. 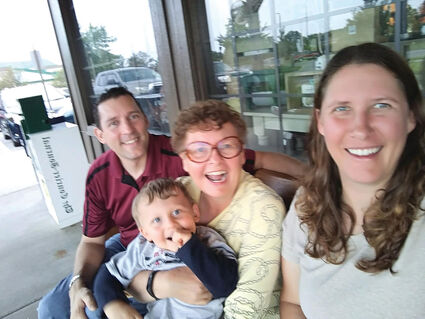 Connie with the lights of her life, (from left) son, Nick; grandson, Anthony and daughter, Dawn.

"In 2002 I tried my hand at antiques and rented a display case at an Antique Mall. I decided to invest $500 in rental fee and inventory; and after six months if I did not make a profit I would quit. All I got out of it was an Antique Dealer, named Bruce Davis," she shared. "He was widowed and I was divorced---and we had the Antique Bug. We have been very good friends ever since and have enjoyed traveling and antiquing to include doing the 'Longest Yard Sale.'"

Those who know Connie are likely aware of three interesting things we asked her to share about herself:

*"I wore purple clothing every day during my 50's; when I hit 60 I realized there were lots of other beautiful colors and now I wear all colors."

*"I wear red every Friday to honor the military. Remember Everyone Deployed"

*"I have a collection of 442 satin beaded necklaces. Some mornings it is difficult to find the right color to match my outfit."

Watch for her at the front of the Fall Festival Parade on Monday morning, she will be the one with the bright, cheerful smile smiling and waving to the many, many friends she has met along her 25-year journey.