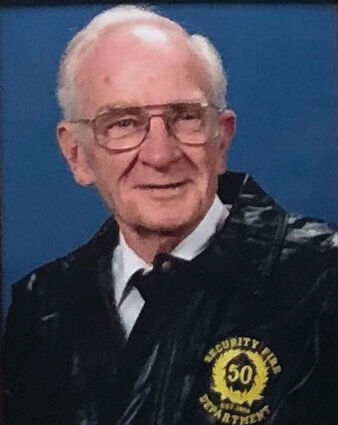 Thomas Everett Salmon, 92, passed away on August 1, 2020, at a local hospital surrounded in love by his family.

Tom was born on February 21, 1928, in Wichita, Kansas, to Dorothy Mae and Thomas Everett Salmon, Sr. His childhood was spent in Wichita until his family moved to Pueblo, CO, for a brief time in 1940. Returning to Wichita as a young teenager, Tom served in the Navy from 1945-1949 and following his enlistment, returned to Wichita to work at Boeing.

Tom married Darleen Williams on December 24, 1950, in Wichita, and they moved to Colorado in 1956. On April 1, 1957, Tom started Security Garbage Company with a handshake agreement. That agreement with the Sproul family led to an occupation that spanned 24 years and created a second company, Waste Systems, Inc., which is still thriving today.

From a young age, Tom loved flying airplanes and racing "stock cars," even racing the Pikes Peak Hill Climb in 1963, crossing the finish line two minutes after Parnelli Jones. Tom created treasured memories for his grandchildren in the 'Embassy Suites' motorhome, fishing and camping, and learned to waterski at 53 years old. He cheered for the Denver Broncos, the Colorado Rockies, the Widefield Gladiators and every single one of his grandchildren. When he wasn't serving his community, he was enjoying the company of family and friends, telling a captivating story, cracking a joke, or making up a silly song. He adored his family, and they adored him.

In lieu of flowers, Tom has asked for memorial contributions to be sent to the Security Fire Department or the Security Fire Department Women's Auxiliary (400 Security Blvd., Security, CO 80911). A private family memorial service will be held. We hope to hold a reception in the near future for extended family, friends and community members. We will live stream the service; please go to the Widefield Community Bible Church Facebook page at 10 a.m. MST on August 15, 2020.