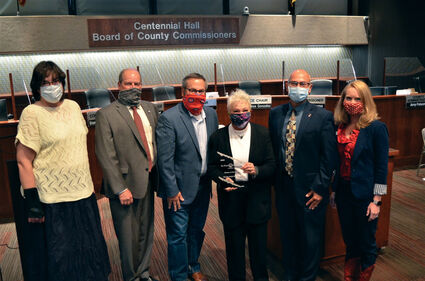 El Paso County Commissioners join the 2020 Veteran of the Year Col. Nanette Brédé Mueller after the awards ceremony on Sept. 10.

Last week, El Paso County's Veterans Service Office and the El Paso County Board of Commissioners announced Col. Nanette Brédé Mueller as the Veteran of the Year at their annual ceremony.

Mueller is a difference-maker, organizers said.  During her 29 years of distinguished military service in the U.S. Army and U.S. Army Reserves, Nanette mobilized and deployed with chem-warfare gear to Washington, D.C. after the terrorist attacks of 9/11 as part of Operation NOBLE EAGLE, in defense of the homeland. She led efforts building the defense of the nation's capital under the command of NORA...