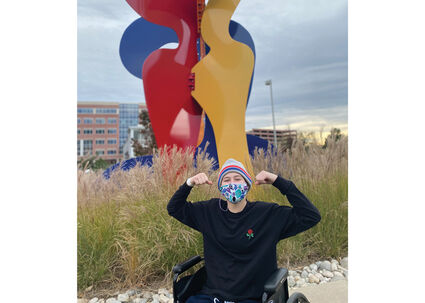 "To say the least, my life's been turned in a complete 360," Widefield resident Tracy Pressgrove observed.

A single mother with seven children (two grown, five still at home), Pressgrove noticed her 16-year-old daughter Christalynn Pressgrove (or "CC," as her family calls her) started showing "weird signs" on Sept. 12. Initially, her legs and arms felt numb, and a doctor thought CC was suffering from some kind of shoulder pain. Over the next several weeks, CC's symptoms grew to include stomach pain, headaches, pain throughout her body as well as irritability and confusion.

Then on Sept. 30, shortly after Pressgrove had started a new office job, she got a call at work: CC had a seizure while driving with a sibling and a friend. CC ended up in a children's hospital in Colorado Springs, and was later transferred to an Aurora hospital for particular treatments; all told, she spent a total of three and a half weeks in care. During that time CC was sometimes comatose, had difficulty speaking, experienced hallucinations and struggled to use the restroom or to sleep. Pressgrove estimated that CC couldn't sleep for two and a half weeks. Specialist doctors looked into CC's case, and eventually suggested CC might have an autoimmune problem. They recommended a lumbar tap so that the Mayo Clinic could take a look at CC's spinal fluid. Pressgrove agreed, and the Mayo Clinic sent the test results back on Oct. 22: CC had NMDA Anti-receptor Encephalitis, a disease discovered in 2007.

The University of Pennsylvania's Perelman School of Medicine has a website explaining the condition, which was first diagnosed by Dr. Josep Dalmau and associates at the University of Pennsylvania. The webpage describes NMDA Anti-receptor Encephalitis as "an autoimmune disease, where the body creates antibodies against the NMDA receptors in the brain. These antibodies disrupt normal brain signaling and cause brain swelling, or encephalitis."

Since the disease was only discovered 13 years ago, research is still developing. However, the University of Pennsylvania says it is more common for women to have NMDA Anti-receptor Encephalitis than men, and more common for children and young adults to contract it than adults. The web page also lists eight common symptoms:

Movement Disorder (rhythmic motions with arms or legs, abnormal movements with the face or mouth)

Patients generally show most of the symptoms rather than just one or two (the first three being the most common). Usually, doctors determine whether patients have NMDA Anti-receptor Encephalitis by testing their blood or cerebral spinal fluid.

"I can write a book on what we have been through so far," Pressgrove said. "From seizures, to comatose response, not able to speak, the list goes on and on!"

CC has recently been discharged from the hospital. While there is no cure for NMDA Anti-receptor Encephalitis yet, there are treatments to stabilize the symptoms. The University of Pennsylvania describes a "first line" of treatments which may include removing any tumors that doctors find, plasma exchanges, and giving the patient steroids as well as an antibody known as immunoglulin (IVIG). The suggested "second line" of treatments is to give patients one of several prescription medications. As of press time, CC is receiving several daily medications and weekly infusions of the prescription medication Rituximab.

"Her team of 13 specialist doctors stated as long as she stays stable we can do weekly outpatient infusions along with several different specialty doctor appointments each week," Pressgrove said. She added that at this time, doctors estimate that CC will have at least a year of rehabilitation.

"She has a long road ahead of her and we will not know the full extent of any brain damage for about 6-8 months as long as her condition continues to slowly improve," Pressgrove said. "It's baby steps each day."

However, even with successful treatment, CC may not be out of the woods yet. Along with the symptoms already mentioned, she has also been experiencing muscle pain, double vision and difficulty breathing, which may be caused by another condition, Neuromyelitis optica (NMO). The family is waiting for the Mayo Clinic to send back blood test results confirming whether or not CC has NMO. If she does, treatments for that condition will follow as well. 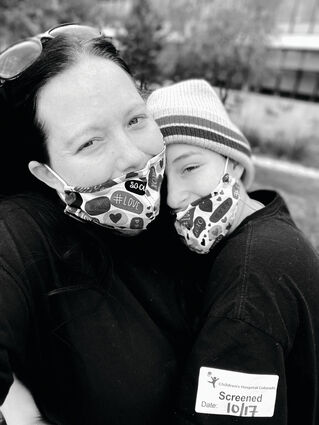 In the meantime, Pressgrove is doing what she can to take care of CC and keep her family intact. The process would be difficult for any single parent, but has been made more difficult by the fact that Pressgrove has no nearby family members and currently doesn't have a functioning vehicle. She also wasn't able to work during CC's treatment. Cassie Smith, Pressgrove's employer at True Nature Roofing in Colorado Springs, is doing what she can to help.

"Anything you can do to help would be so appreciated, even if you can't donate, please share to help support CC and her momma during this very difficult time," the page's description reads. As of press time, the page has raised $1,860 with 28 donors. To donate to the GoFundMe page, go to https://www.gofundme.com/f/help-cc-and-her-mom-tracy.