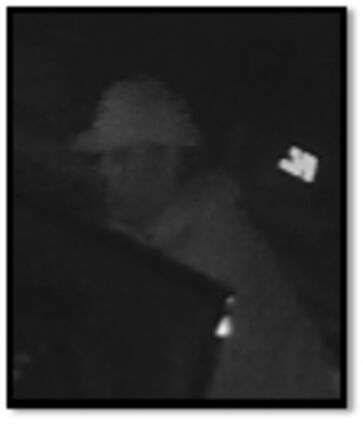 The El Paso County Sheriff's Office is asking the public to help identify the suspect in a vehicle break-in that occurred early Monday in Security.

The break-in and theft occurred in the 5600 block of Alturas Drive (near Charro and Yucatan drives) at approximately 3:13 a.m. Monday. The suspect was seen on the victim's home security camera footage standing on the rear driver side tire while opening the tool box in the truck bed and stealing tools.

Taking two trips, the suspect stole tools from the victim's truck, then left quickly in his vehicle. The suspect then returned approximately 4 minutes later, climbed into the bed of the truck, and took more tools valued over $1,300.

The suspect is described as a white male wearing a baseball cap, hooded sweater, jeans and tennis shoes.

The Sheriff's Office is asking for anyone with information regarding this case to call the Patrol Tip Line at 719-520-7777 and reference case #20-13223. "Any information may prove valuable in solving the case and could consist of things as simple as anyone remembering suspicious vehicles or people they saw in or around the area at the time of the crime," an EPCSO spokesperson said.