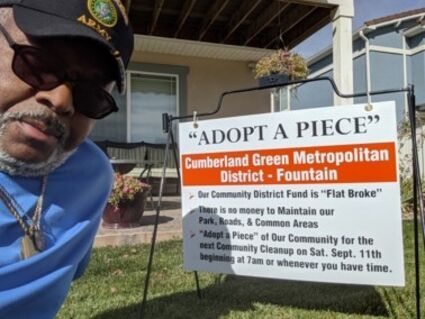 Former Cumberland Green Director Ernest Coleman still has the sign that reminds him just how tough things were back in 2010.

Newer residents of Cumberland Green may not know about the tough times this metropolitan district has behind it. But people who have worked tirelessly to keep it solvent recollect how far they've come in the last decade. The district just marked the 10th anniversary of the appointment of its first ever Resident Board of Directors, and several of those directors recall the challenges faced back then and how far the district has come.

"It was a terrible time for our community back then that many new residents today probably are not aware of," recalls former Director Ernest Coleman. "When I first purchased my home in January 2008, I looked for a premier community where I wanted the property value to continue rising and that meant a well-kept community that was appeasing to the eyes. But somewhere along the way something went terribly wrong."

The Investor Board of Directors held its last meeting on December 10, 2008. Over the next two years, things fell into disarray. Streets became overgrown with weeds and shrubs that grew out almost 3 feet tall from the cracks of the road and along the curbs. The park grass resembled a dried desert field. The trees along Jimmy Camp Road were all dying. Former Director Arnold Lewis remembers going to the park with his children.

"One day we went out to play and noticed the grass was brown and losing its beauty," Lewis recalled. "Then I drove down Jimmy Camp Road noticing the weeds growing out of control on the side of the road. I then realized that the contractors were not taking care of the park and roadways. I believe that is when we got together and notified a reporter who came out to the park and did a story on our situation and the builder."

Lewis teamed up with four other residents (Phillip J. Thomas, Brandi Lewis (no relation), Wendy McNeill and Ernest Coleman) to investigate why the District was in such bad shape. What they discovered shocked them: since the Investor Board hadn't met in two years, basic maintenance jobs were not being performed. The District's accounting firm could not legally disburse monies without board meetings, which meant it couldn't pay contractors to maintain the landscape. The District Manager could not be paid to oversee the District. The landscape maintenance water bill was not paid, nor was the Community Management firm which enforced the covenants and design reviews. The District could not pay basic accidental insurance, the El Paso County Treasurer could not be paid for its services and the District's legal guidance bills were piling up. On top of all these maintenance problems, the company in charge of developing the District, Jimmy Camp Development Inc., had gone bankrupt. As a result, Oakwood Homes could not continue building homes beyond what was already developed.

The five residents started out by lobbying in the streets along Jimmy Camp Road. They tried to convince residents to adopt a section of the landscape to maintain or use their personal lawn equipment to help since the District had no money for basic lawn care.

"I think the biggest thing for me looking back was how many of us went from not even fully understanding what a special tax district was to having to learn how to step in and run one," Lewis said. "There was a huge sense of accomplishment as we transitioned from 'clueless residents' watching our neighborhood fall into shambles to stepping in and taking the power away from a bankrupt, detached developer who never cared about us – because he wasn't one of us. I remember a huge sense of accomplishment as we took our own personal lawn equipment and policed the neighborhood and went door to door handing out flyers to invite neighbors to the first ever public meeting. It was hard work, but we were now in control of the fate of our neighborhood."

Eleven days after the appointment, the Board held its first meeting. They had a full agenda going back almost two years trying to catch up to past, current and future actions. Since they had no experience with operating a special district and no help from the defunct Investor Board (one director stated, "The Investor Board simply turned their backs on us"), they had a great deal to learn in very little time.

The Board also made a series of moves to save money as much as possible. It took on the management role and administrative actions, and replaced the existing management and accounting firm as well as the law firm with new ones that were within the District budget.

Today the District is thriving. Residents credit the Board of Directors' hard work, as well as great contributions by the subsequent board members, including Robert Wilson and the current Board as well as Design Review Committee members Jeffrey L Brooks, Anthony Petrone, Brandi Lewis, Patrick Lewis and many others. By stepping up to the change, residents picked up where the Investor Board failed and kept the District going.