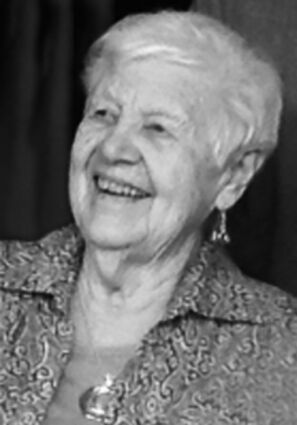 Rogene Maxine Smith, 88, passed peacefully into heaven on Dec. 2, 2020. She was born June 30, 1932, in Portis, Kansas. After the premature death of her mother in 1941, she was raised by her cousin, Lucile Gledhill, in Downs, Kansas. Upon graduating from high school she went to live with her brother Herman Muck in Osborne, Kansas, where she eventually met her husband Daryl. They were married July 6, 1953. The couple arrived in the Fountain Valley area in 1956 where they bought their first home in the "new Colorado Springs "suburb" of Security. They raised their two daughters there before moving to 5 acres on Old Pueblo Road in 1975.

Rogene was a loving and devoted housewife, always putting her family first. She was an exceptional cook and made many delicious pies, cakes and breads. While living in Security she grew beautiful flowers in her gardens. As she raised her family she also helped with the family side businesses-taking orders for fertilizer and soil amendments, selling Christmas trees in the winter and fireworks in the summer, cutting, splitting, bundling and delivering firewood to 7/11 stores, and in 1984 managing and working in their commercial green house. Rogene was very outgoing and never knew a stranger, making you feel as if she had always known you. She never forgot a name. She was always ready to help when friends were in need. She thoroughly enjoyed her grandchildren and enjoyed their secret trips to Taco Bell when they were young.

She has requested no services at this time. Her ashes will be scattered in the future with her husband's.

We all miss you.