Hope and joy through music 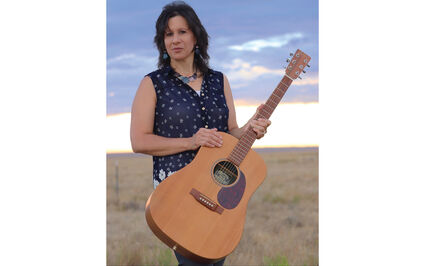 Priscilla Cooper, a Security resident for 24 years, plays worship music at Calvary Fellowship Fountain Valley and is starting to release her own praise and worship music. Her most recent song is an upbeat Christmas tune titled "The Greatest Gift."

While Security resident Priscilla Cooper had been around music since she was a little girl (both of her parents were musicians), she never planned on being a songwriter. Prior to 2007, she had some experience writing poetry, and during a brief period working as a clown for children's parties she wrote and performed a song titled "Read a Book." Beyond that, her experience was limited to singing other people's music.

Then she went through a very dark period where, in her words, "I basically hit rock bottom."

This difficult period pushed her to reconsider her faith and see where she could find substance in it. Every day she would read Bible verses like 2 Timothy 1:7 ("For God has not given us a spirit of fear...") and remember them throughout the day. Ultimately, she found healing and came out of that period with a strong sense of joy and of empathy for others.

"Bottom line is God healed my heart," she said. "There is no way something that incredible can happen and you don't want to share it."

Cooper also started writing songs, primarily from ideas that came when she was praying or reading the Bible. She refers to this process as God giving her the songs.

"'Captivated' is about how I wanted to be like the apostle Paul, and just be captivated by God," she said as an example.

Her songwriting style owes a lot to Contemporary Christian Music bands she enjoys like MercyMe and Casting Crowns.

"I would love to be a fly on the wall and see what their songwriting process is like," she commented about the second group.

She's also been impressed by Jeremy Camp, whose music she discovered during her dark period. Some of Camp's more famous songs came out of his experiences marrying a woman who died five months later from ovarian cancer. Cooper particularly recommended Camp's song "Walk by Faith," as well as the film "I Still Believe" based on Camp's story.

"The power of his lyrics and testimony really inspired me," she said.

For a while, Cooper was writing songs but assumed that one day someone else would record and perform them. As she shared her songs at women's events, her friends encouraged to reconsider.

"After a while, they said, 'Maybe God wants you to do it,'" Cooper recalled.

She began playing worship music at her church, Calvary Fellowship Fountain Valley, and in 2015 met music producer Brian Wood at a house concert.

"During small talk, Brian asked me if I was a musician and songwriter as well," Cooper said. "I reluctantly answered, 'kind of... I have like 20 originals I have written. I do someday want to record them so I can hand them off to someone else that can record them and make them all they can be.' With that Brian handed me a card with his info for his recording studio. Knowing I was not financially in a place to even consider paying out money to record, I thanked him for the card but let him know that I couldn't afford any sessions now or probably anytime soon. In a matter of seconds, Brian looked at me and said, 'I'm not looking for your business, I am offering to record your songs for you at no cost.'"

"I think I almost fainted," Cooper recalled. "At least it felt that way. God showed up again in answering a prayer that I had prayed for many years. I had been so heartbroken at times that these powerful, inspirational, hope-filled songs were just sitting 'collecting dust' because he entrusted them to me. I was someone who did not know how to make these songs as amazing as they deserved to be."

She recorded some one-take demos with Wood, and working together they recorded material for a CD. A year later, Wood had moved to Tennessee and offered to master the CD if Cooper could come to Tennessee and finish it. Unfortunately, health issues kept her from being able to travel.

"It was a dime-sized hole in my heart between the right and left atrium," Cooper explained.

Looking back, Cooper is glad that her faith was strong during that health ordeal.

"If I had not been in the place I was with my relationship with him, I am sure it would have been a very scary and traumatic experience," she said.

However, this still meant that her hopes to have her music produced had reached a standstill.

"It felt like that dream died for a while," Cooper said.

In 2018, she learned about Studio916, a recording studio at Sand Creek Library that was free for Pikes Peak Library District patrons. Cooper worked with library employee Keagan Kellogg and TerryJosiah Sharpe to produce the album, with Sharpe contributing background vocals to some of the songs. Library volunteer Paul Conkling also helped as producer.

"They made my recordings more than I ever thought possible," Cooper said.

A retired optometrist, Conkling refers to producing as his "golf game." He contributed some lyrics to the project as well, writing the song "Have I Ever Told You." This song was intentionally a bit more subtle than Cooper's other praise and worship songs.

"He wanted it to be like it could be about Jesus or it could be a love song," she recalled, "and it worked great."

While this approach is different from other songs that have various Bible references, Cooper didn't have a problem with it, arguing that either way is a form of worship.

"As long as the message is there, that's what's important for me," she said. "I consider myself just lucky enough to hold the pen." 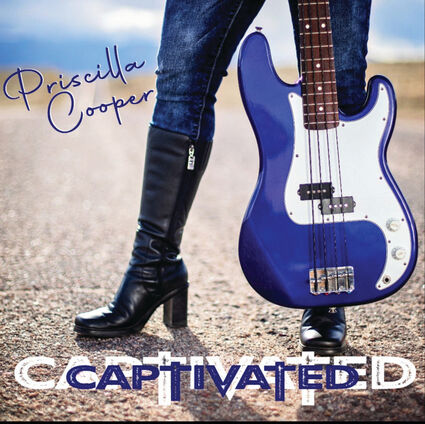 "Captivated," a praise and worship song inspired by reading about the apostle Paul, is Priscilla Cooper's most popular song on her YouTube channel.

They had three tracks to go to before they could finish and release the CD when Studio916 shut down due to COVID. At that point Sharpe, who owns the local production company Anthem Music Enterprise, became Cooper's promoter. Working with Conkling and others, they began releasing the finished songs online through Amazon Music and other platforms, complete with lyric videos on YouTube. Cooper is donating all the proceeds from her song "Let Me" to her church. So far, her most popular song on YouTube is "Captivated," with 1,000 views. Cooper is also excited about her latest project, a Christmas song titled "The Greatest Gift," which was released on Dec. 12.

"I've wanted to release this Christmas song for seven years," she said.

Cooper has other hopes. Her team is meeting with other music producers to see if they can get anyone interested (Cooper's big dream is to see if MercyMe would be interested in covering or promoting her work). She's also looking into writing songs with other Christian artists and playing worship music at other churches, which she describes as a "worship outreach" opportunity.

Cooper's music is available on all channels, including Amazon Music and her YouTube channel (youtube.com/channel/UCOUfhXOI6etlxQmVDakHaGA). People interested in contacting her can do so through her Facebook page, Priscilla Cooper Music, or by emailing her at [email protected]