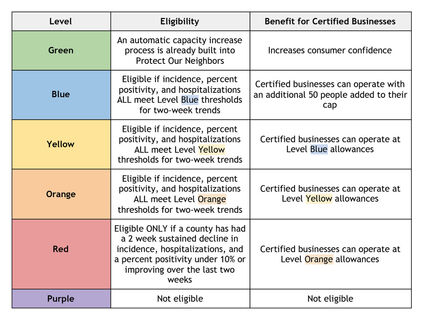 This table explains eligibility and benefits for businesses in the 5-Star program depending on their county's current level on the state COVID dial.

El Paso County commissioners voted unanimously Thursday morning to apply for the state's 5-Star Certification Program, which could allow restaurants and other businesses to operate at higher capacities.

Although it's still a work in progress, officials foresee the program being implemented soon. The initial focus for El Paso County will be on restaurants, and their participation is voluntary. A restaurant would need to meet numerous criteria – and possibly implement several new measures – in order to qualify.

Meanwhile, Gov. Jared Polis announced late Wednesday evening that all counties on the Red level of the state's COVID dial – including El Paso County – could move down to Orange as of Monday. This would allow restaurants to operate at 25 percent capacity indoors; currently, they are permitted to have outdoor seating only.

Participation in the 5-Star program would allow them to operate at a less restrictive level than the county's current level. If El Paso County is on level Orange, a qualifying restaurant could operate at the Yellow level, or 50 percent capacity.

"Throughout this pandemic, we have had to walk a difficult line between the public health crisis and the economic crisis," Polis said in his Wednesday statement. "In reviewing the data today, Colorado has been in a sustained decline for 13 days, and only 73 percent of ICU beds statewide are in use. This is a direct result of Coloradans stepping up and taking the steps to protect themselves and others. In light of this and based on the data, I'm asking CDPHE to move counties in Red on the dial to Orange, effective Monday, Jan. 4, 2021.

"This only applies to counties in Red, which is the category designed to prevent us from having to lockdown in 'purple,'" he continued. "And I'm excited we have thus far successfully avoided another lockdown. To save lives, maybe even your own, it is more important than ever that Coloradans not gather outside their household to celebrate the New Year, and to continue to take the basic steps to protect themselves and others, like wearing masks, only interacting with their own households, and staying 6 feet apart from others when in public."

County commissioners said the announcement, while positive, caught them off-guard and does not make up for Polis' "unilateral" decision-making throughout the pandemic.

Outgoing Chairman Mark Waller said Polis' announcement came only after many complaints from cities and counties about the effect the restrictions were having on their businesses. He said he thinks the decision is due to the Board of Commissioners' persistence.

"I think we were the most vocal county in the state of Colorado," he said.

Despite being the best bet for some businesses to get back to somewhat normal, county commissioners called the 5-star program "burdensome," "onerous," an "unfunded mandate" and full of "bureaucratic red tape." Stan VanderWerf said that they made several suggestions to the governor, but they were rejected.

Waller called the 5-Star program "silly" and said it was disappointing that "we have to go through this massive bureaucratic morass in order to allow restaurants to open." Nevertheless, he and the other commissioners said they voted for it because it seems to be the only option available at this time for businesses to expand their operations.

The program requires participating businesses to implement additional standards in order to reopen or operate with additional capacity. The state released a checklist of requirements, along with the criteria to apply for the program, on Dec. 16. The criteria for a county to apply includes a two-week sustained decline in incidence, a positivity rate under 10 percent or demonstrate improvement over the past two weeks, and under 90 percent of ICU beds in use. Based on those criteria, this region may be eligible to apply for 5-star on Jan. 1, 2021.

Various cities and organizations throughout the county will participate in developing it for local administration.

John Trylch, the city of Fountain communications manager, said he expects city staff to provide input on the county's 5-star administrative committee. He noted that the concept is so new that most people involved are learning as they go along.

"It is developing. It's kind of like building an airplane while you're flying it," he said.

Some of the required conditions for restaurants include:

-Symptom screenings of employees and customers required (instead of recommended)

-No previous citations for noncompliance with public health orders.