Icy ponds no place for children and pets 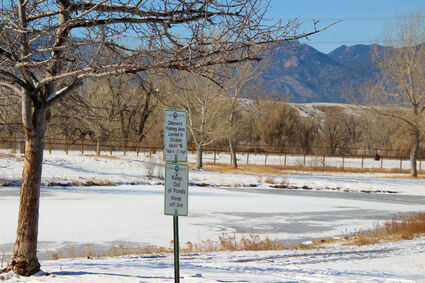 The sign above warns people to stay off the ice at Fountain Creek Regional Park.

It's perhaps the best-known parental warning in winter: "Don't walk on the ice."

However, in spite of the obvious dangers, children are frequently seen walking on frozen ponds in the Fountain Valley area. Amber Hittle-Putra, a resident of Fountain, stated that she often sees children (and sometimes adults) on a frozen pond near her home.

"A couple of weeks ago we had one adult and one child who were going on the pond at night, and actually brought an ice shaver (not sure what the technical name is) and shaved down a huge square area and were playing ice hockey at night," she said. "This is problematic for several reasons. One, it wasn't that frozen. Two, it was dark. And three, the area is actually a protected area for birds. Many different species of bird live in that pond, even when partially frozen. They also nest in the marsh area nearby and people on the ice disrupt their natural habitat."

In another incident, Hittle-Putra remembers police officers arrived after someone called to report children were not only walking on the pond, but trying to break it.

"They were smashing big rocks down trying to break the ice, while standing on it!" she remembered.

"Today while I was on a walk near Cross Creek Park, I saw multiple children on the ice," Nelzi Max said. "As a parent I went and tried to warn the kids the dangers and one of them replied with, 'I know how to swim, I won't drown.'"

"I see kids on the ice every winter, and unless there is an adult with them I call the El Paso County Sheriff's office," Widefield resident Randi Free said. "I called last year and pulled over and waited to make sure a car was sent out. I don't think it was more than five minutes before a deputy showed up. I left then and don't know the outcome."

This publication contacted local authorities to ask about any recent ice incidents.

Jacqueline Kirby, media relations manager for the El Paso County Sheriff's Office, said that county records show five accidental deaths or drownings involving ice across the county from 2011-2018. This record only includes deaths, since the Sheriff's Office doesn't save every single call they get about people walking on ice. Kirby pointed out that generally, fire departments handle water rescues because they have dedicated teams for that purpose.

Fountain Fire Chief James Maxon said he hasn't gotten any recent calls about ice incidents, but that there's always a high chance of them happening due to Fountain's climate. Temperatures in the Fountain Valley get cold enough for ponds to develop ice, but never cold enough for them to completely freeze over.

"It doesn't stay cold long enough for it to ice up," Maxon said.

As a result, the Fountain Valley's frozen bodies of water are never quite thick enough for people to safely walk on them.

"The biggest thing is to stay away from the water and the ice, because you can never tell how thick the ice is," Maxon said. 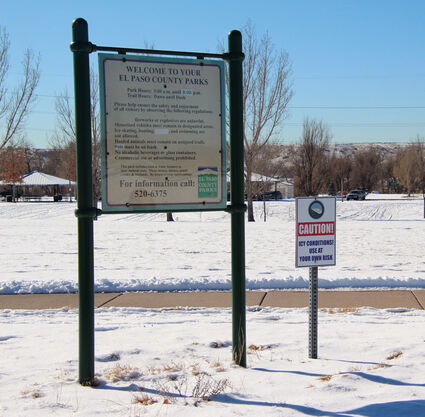 The sign at Fountain Creek Regional Park tells visitors that ice skating and other water activities are not allowed.

Jim Chapman, who serves as a battalion chief for Security Fire Department, gave more background detail. Chapman said that since Security only has two bodies of water and Security Fire doesn't have as many water rescue resources as Fountain Fire, his department rarely gets calls about ice incidents. However, Chapman remembered some incidents that Fountain Fire handled at Willow Springs Ponds over three years ago. According to Chapman, most of the incidents involved pets walking onto ice and owners falling into the ice when they went after their pets. Pets can easily end up on ice if they're roaming freely, particularly dogs chasing other animals.

To avoid this problem, Chapman recommended that residents keep their pets leashed during outdoor winter walks. If pets walk onto ice, residents must call for assistance to retrieve them. He affirmed Maxon's point that local ice tends to be thin and that it's always best to stay off it.

According to Maxon, pet owners are recommended to call 911 for assistance retrieving pets, since the situation could be life-threatening. After dispatchers receive the call, police and firefighters will arrive to assess the situation. Residents trying to help someone who has fallen into a frozen pond should also call 911.