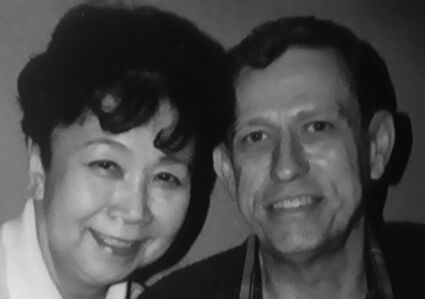 The lovely mermaid of the Widefield swimming pool now swims in Heaven. Hiede M. Haakenson, born in Kumamoto, Japan on 10 March 1931 to Seigen and Kimie Miyazaki, has passed away at nearly 90 years of age.

Hiede was an excellent student, preparing at the end of World War Two for college when her father passed away from cancer. She became at 17 years old the family's primary provider, often working several jobs and going hungry to support her mother, four siblings and herself.

Eventually Hiede's English-language skills led to a position with the U.S. Armed Forces at Camp Kumamoto and later on at both Itazuke Air Base in Fukuoka and Johnson Air Base in Tokyo. She became a skilled, sought-after Japanese Sumi-E artist, exhibiting widely and teaching classes in mainland Japan, Canada, Germany and a number of states in the U.S.

It was in 1962 that Hiede's tennis game would lead to a real "love match." While playing at Johnson A.B, Hiede met Eugene "Gene" Haakenson. They were married for almost 58 years.

Hiede is survived in the U.S. by her husband, Gene; their sister-in-law, Lila Haakenson and her family; as well as in Japan by sisters, Junco Yoshimura and Hisaco Saiki and husband; nephew Kousuke Saiki and niece Chikaku Yoshimura.

Special thanks to Danielle Beattie, Chifumi Wietgrefe, Jim and Charlotte Murtha, Fumiko McGuigan, and Thomas Haakenson (nephew) for their spiritual and loving guidance, as well as to the staff of both the home and the hospital hospice care teams of Pikes Peak Hospice & Palliative Care.

Donations can be made in Hiede's honor to support Widefield Parks & Recreation Aquatics at 705 Aspen Drive, Colorado Springs, CO 80911.

A celebration of Hiede's life will be held at a later date.