A community goes blue for Gannon

With the one-year anniversary of Gannon Stauch's disappearance approaching, members of his Lorson Ranch neighborhood and the surrounding community are banding together once again in a display of love for the 11-year-old boy who was found killed after weeks of searching.

"What we wanted to do was something to honor him, and also a way to commemorate the way our community came together," organizer Kellie McGregor said.

She and others are encouraging as many people as possible to place blue lights around their homes, or other blue symbols, much as they did when Gannon was reported missing and the residents of the area did their best to light the way home for the little boy as authorities and volunteers searched for him. At the time, they considered the blue lights a welcoming beacon for Gannon, whose favorite color was blue, and they hoped that the runaway would know he was loved and cared for if he saw the sea of blue lights in his neighborhood. Even businesses across the Fountain Valley switched out their regular bulbs for blue, people were sporting Gannon t-shirts and bracelets, and so much more.

Soon after Gannon was reported as a runaway by his stepmother, Letecia Stauch, on Jan. 27, 2020, neighbors began tying blue ribbons to trees, placing signs, balloons and stuffed animals at a front corner of Lorson Ranch at Fontaine Boulevard and Marksheffel Road. The other side had a large sign that read "Pray for Gannon." The front of his school, Grand Mountain School, was adorned with a huge banner. Hundreds of people gathered for a candlelight vigil in an open space in the neighborhood.

But as the days went by, it became clear that Gannon was not a runaway after all. On March 2, police arrested Letecia Stauch for his murder. His body was found a few weeks later in Florida. As of press time, Letecia remains in jail in El Paso County. She was recently granted a second mental competency evaluation, and during a hearing this Tuesday she was again found competent to stand trial. The next hearing is expected in March. 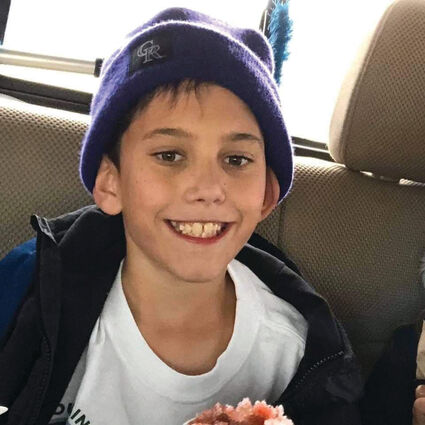 Jan. 27 will mark one year since Gannon Stauch, above, was reported missing. Many in his Lorson Ranch neighborhood and surrounding communities are bringing back the blue lights in his memory, including Kellie McGregor's home at left. They are hoping to flood the area with blue by Jan. 27.

The outcome crushed not just the local community, but supporters from around the world – many of them total strangers, drawn together by a mutual concern for a little boy. In Lorson Ranch, signs and an enormous monument of hand-written notes, balloons and toys – such as his favorite character, Sonic the Hedgehog – remained in place at the neighborhood entrance for a few months until the weather was deemed too bad for it to endure any longer. Some of the ribbons linger on trees and fences, battered by nearly a year's worth of Colorado weather.

Last year's initial post on a neighborhood Facebook page about Gannon's disappearance generated more than 2,000 comments overnight. Now, McGregor and others are hoping to have at least 2,000 posts from people showing their blue lights in memory of Gannon.

Many people still have their blue lights from last year.

"It's part of their history," McGregor noted.

Anyone with blue lights is asked to share a photo on a special post pinned to the top of the "Colorado Springs Events and Fun" Facebook page over the coming week.

Organizers hope to obtain drone video footage of the community lights to share with everyone as well.