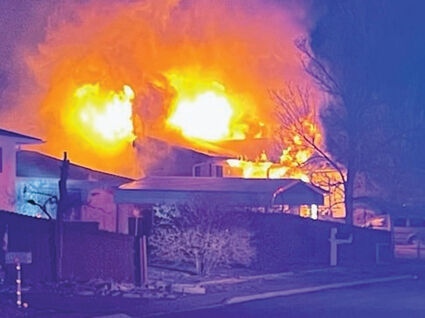 A Jan. 22 house fire on Harvard Street in Widefield left the home uninhabitable.

Fire crews responded to a house fire on Harvard Street early last Friday morning. Although residents made it out, the home was seriously damaged and several pets were lost.

Security Fire Department (SFD) described the fire as "fast moving," but crews from the South Group were able to put it out and protect nearby structures.

"With assistance from our amazing South Group family the fire was extinguished," SFD said in statement. "The cause remains under investigation."

Venda Beckstead, whose family lived in the Harvard Street home, has started a GoFundMe page to raise money for replacing clothing and other items lost in the fire. The page states that Beckstead's family recognized a fire was in progress and individuals were able to get out of the home safely.

"My 18-year-old sister recognized the signs and was able to save herself, my two brothers, and my mother," Beckstead wrote. "We don't know what started the fire, but we are devastated."

In addition to belongings being destroyed, four pets (two cats, one snake and one parakeet) were also killed in the Harvard Street fire. To learn what items are needed or to donate money, go to gofundme.com/f/jk4z8e-help-my-family-recover-from-a-house-fire.

This was the second house fire in Security-Widefield last week. The other, on Widefield Drive, also remains under investigation. (See p. 1 for story on that incident.) SFD hopes to have an update on possible causes this week.