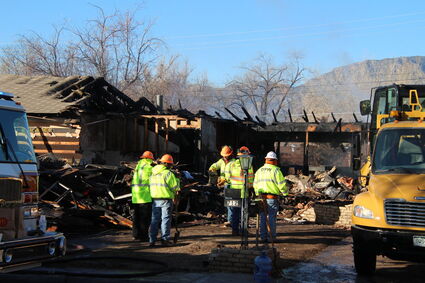 County crews were cleaning up some of the larger debris at 712 Widefield Drive early Wednesday morning after firefighters put out a fire that destroyed most of the building.

A house fire destroyed a home directly across the street from Widefield and Discovery high schools early the morning of Jan. 20. The exact cause remains under investigation.

By Wednesday morning when students started arriving, fire crews continued working the scene at 712 Widefield Drive. El Paso County Department of Public Works had employees cleaning up large chunks of debris throughout the morning, but a big mess remained. People were seen later in the afternoon sifting through the rubble.

Security Fire Department reported that there was no one in the home when firefighters arrived. Homes on either side appeared unscathed. Firefighters from Hanover, Fountain and Stratmoor Hills fire departments aided in the effort.

Numerous neighbors, though dismayed at the severity of the fire so close to their own homes, were not surprised. The property has been the subject of many complaints over the last few years. There have been claims of drug activity, homeless people camping out and more. It's also not the first fire at the house. In fact, the roof never was replaced after a previous fire severely damaged it in October 2017.

On June 30, 2020, a man living in the home claimed another resident shot him with a gun. Although the El Paso County Sheriff's Office said they didn't find evidence of a shooting, Sgt. Deborah Mynatt confirmed that EPCSO had responded to that address 128 times in the last five years. Two people were arrested that day on unrelated felony warrants.

By that time, the county already had quietly initiated a legal process for possible condemnation or other resolution, but that sort of action takes a long time to accomplish.

At the time, County Commissioner Longinos Gonzalez said the county had conducted at least two clean-ups on this particular property and was working on a long-term solution involving legal action.

"We hope to get it resolved soon," he said.

Gonzalez said he personally had received a few complaints directly from residents, and he knows that other county departments such as Code Enforcement have others as well.

Regarding the length of time that has gone by without significant results, Gonzalez said he acknowledges that the process seems slow.

"The property owner has legal rights we can't violate," he said. "We're working on a long-term solution, but that requires a legal process that takes time."

Another house with similar complaints against it, at 106 Bradley Street, was being addressed in a similar manner. Both properties had histories of major fire damage in recent years, as well as complaints related to upkeep, potential hazards and questionable occupancy.

The house on Bradley Street, however, was already demolished a few months ago. 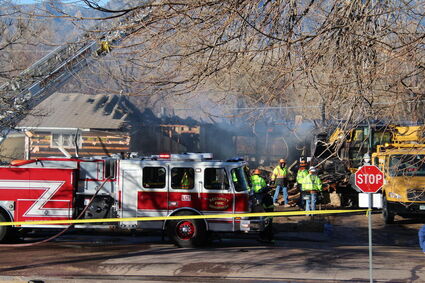 El Paso County Department of Public Works helped clean up larger pieces of debris once the fire was out.

"Since you last contacted us in July, we have been working on the demolition and cleanup of the 106 Bradley property," county spokeswoman Natalie Sosa told the Fountain Valley News. "That process is now completed, and we have turned our attention fully to 712 Widefield."

Sosa said an inspection warrant application was prepared for 712 Widefield to conduct environmental testing of the subject property in order to obtain appropriate demolition permits and determine the appropriate abatement protocols if hazardous materials are discovered.

"At this time, the Department of Public Works is in the process of awarding a contract for the inspection," she said on Jan. 21. "The county will bring the property into compliance with county ordinances and the building code regardless of the extent of the damage sustained in the recent fire, but we will need to tailor our cleanup approach in light of the fire last night."