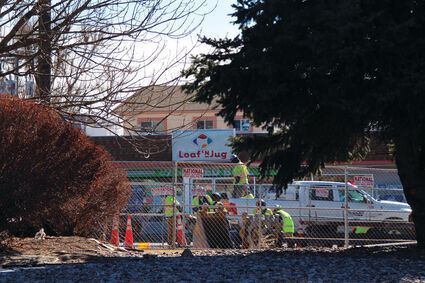 Crews from the U.S. Army Corps of Engineers and contractor AECOM are working on an underground pipeline related to a PFAS treatment facility for Widefield Water and Sanitation District at the corner of Hwy. 85/87 and Alegre Drive in Fountain.

Construction related to a PFAS treatment facility in Widefield has caused the corner of Hwy. 85/87 and Alegre Drive in Fountain to be blocked off for some time – prolonged by unforeseen setbacks.

However, the end may be in sight. Widefield Water and Sanitation District Manager Lucas Hale said officials hope the intersection will be back open this weekend or shortly thereafter.

"Unfortunately, the jack and bore process is not very forgiving," Hale said. "It is like trying to thread a needle underground in the dark without the ability to see. The most recent closure of the intersection at Alegre was due to an issue that we discovered during our testing of the water pipeline. The issue was with the water pipeline, which was installed in this bore. AECOM/Army Corp have been working to repair the issue."

The Army Corps and its contractor had to pull the entire water pipeline completely back out of the bore under the highway and the railroad and reinstall the water pipeline to repair the problem, Hale explained.

"This is very time-consuming and difficult," he said. "We are expecting the intersection at Alegre to be open shortly after Jan. 29. We have been in contact with the businesses and homeowners in the area to keep them apprised of the situation."

In the meantime, a number of residents in the area have made it a point to visit the Loaf 'N Jug convenience store at that corner in order to give the business a boost in the midst of the street closure. Currently, access from Hwy. 85/87 is blocked completely. There is a detour through the rear of that neighborhood.

Maria Garrett took to social media to rally neighbors to the cause. Several responded and thanked her for the heads-up, promising to make a special trip to the store to purchase at least something.

"COVID has been hard enough on businesses without this kind of obstruction further adding to the strain," she posted on Nextdoor. "It may be a little out of your way now, but please consider stopping in for any convenience store purchases." 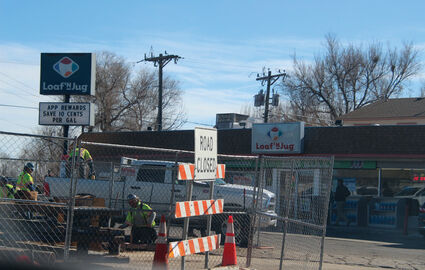 Garrett said she occasionally visits the store and recently noticed how the construction must be affecting the business. She chatted with the store operator and found out that the project was supposed to have been completed weeks earlier and that the timeframe now had been delayed.

"I went in on the 10th and said something about them still being there and he told me they'd just informed him it had been extended," Garrett said. "Normally when I go in there, there's at least a couple customers. It's just been me and I felt terrible. I mulled over making the post for a few days and finally decided to. I realized I can continue shopping there, but more of his customers need to return. He didn't know I made the post, and after I told him he thanked me several times."