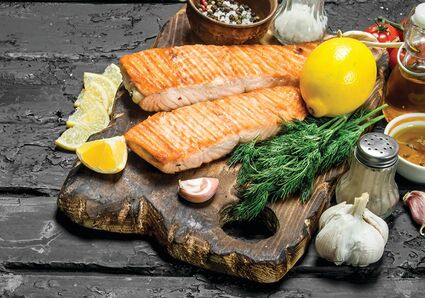 The Mediterranean diet is in the news again, not only because it's the start of a new year, but also because it was named as one of the most popular and healthiest diets by several publications. The origins of the "Mediterranean diet" are lost in time, because it's based on the eating habits of the Middle Ages, in which the ancient Roman tradition – on the model of the Greeks – identified in bread, wine and oil products a symbol of rural culture and agriculture. These were supplemented by sheep cheese, vegetables (leeks, mallow, lettuce, chicory, mushrooms) and a little meat; and among Romans, a strong preference for fish and seafood.

According to a National Center of Biotechnology Information article, the discovery of the health benefits of the Mediterranean diet is attributed to American scientist Ancel Keys, who researched the correlation between cardiovascular disease and diet for the first time.

In the 1950s, Keys was struck by a phenomenon, for which he could not, at first, provide a full explanation. The poor population of small towns of southern Italy was, against all predictions, much healthier than the wealthier citizens of New York, many of whom had Italian ancestors who emigrated to the United States. Keys suggested that this depended on food, and tried to validate his original insight, focusing on foods that made up the diet of these populations.

This study proved that populations that had adopted a diet based on the Mediterranean diet presented a very low rate of cholesterol in the blood and, consequently, a minimum percentage of coronary heart disease. This was mainly due to the plentiful use of olive oil, bread, pasta, vegetables, herbs, garlic, red onions and other foods of vegetable origin, and a rather moderate use of meat.

The modern Mediterranean diet is characterized by the emphasis on plant foods such as grains, vegetables and fruits. Olives, olive oil, nuts, beans, legumes, seeds and herbs/spices are also part of the Mediterranean eating style. The Mediterranean lifestyle also recognizes the importance of physical activity and social interaction at mealtimes.

Grains should be mostly whole grains and can include whole-wheat breads, whole-wheat pasta, oats, brown rice, couscous, quinoa or barley.

Olives and olive oil are staples of the Mediterranean eating style. Olive oil is the main source of fat and is used in cooking, as salad dressing, as a light drizzle on vegetables or as a dip for bread. Olive oil is higher in heart-healthy unsaturated fats and should replace saturated fats like butter or margarine.

Nuts, beans, legumes and seeds are the main sources of protein, healthy fats and fiber. Common beans include chickpeas (garbanzo beans), cannellini beans, kidney beans, lentils and black beans. Nuts are good as a snack, on a salad or added to other dishes.

Herbs and spices add flavor and aroma to foods. They reduce the need for salt and can be rich in health-promoting antioxidants.

This delicious baking-pan recipe for Salmon Roasted with Broccoli and Tomatoes is an effortless way to incorporate the Mediterranean diet eating plan into your lifestyle.

SALMON ROASTED WITH BROCCOLI AND TOMATOES

2. In a medium bowl, combine tomatoes, broccoli, garlic and the remaining 1 tablespoon of oil, the Italian or poultry seasoning, and the salt and pepper; toss to coat. Place in pan with salmon. Roast 15 to 18 minutes or just until salmon flakes.

3. Meanwhile, remove 1 teaspoon zest/peel from the lemon (do not use the white flesh or pith) and squeeze 3 tablespoon juice from lemon. In a small bowl, combine lemon zest and juice, the basil and/or parsley, and the honey. Spoon the mixture over salmon and vegetables before serving.

TIP: To thaw frozen fish, place in a sealed bag and submerge in a bowl of cold water for 30 minutes.