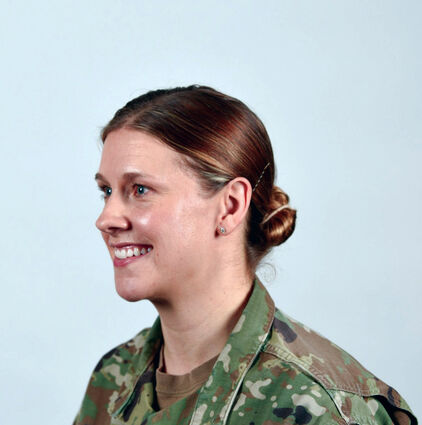 A female Soldier poses for an example photo with medium-length hair secured into a ponytail to support an upcoming change to Army grooming and appearance standards. Medium-length ponytails are only authorized for wear on the back of the scalp and cannot exceed the head's width or interfere with a Soldier's headgear.

From an Army News Service by Devon Suits and a U.S. Army Public Affairs report

WASHINGTON - The U.S. Army has announced major revisions to Army Regulation 670-1, Wear and Appearance of Army Uniforms and Insignia, which will include guidance on wearing the new Army Green Service Uniform and several other key changes. In addition, the Army is also revising its grooming standards to support its People First priority and diversity and inclusion efforts.

"The Army must continue to put people first by fostering a culture of trust that accepts the experiences and backgrounds of every Soldier and...