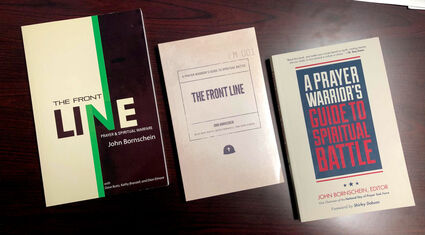 Pictured are various editions of John Bornschein's book on prayer.

John Bornschein, senior pastor at Calvary Fellowship Fountain Valley (4945 Cable Lane in Security), has a wide experience with prayer. He worked with the National Day of Prayer Task Force (NDPTF) for 20 years, eventually becoming its vice chairman and an executive member of the National Prayer Committee.

Now one of his books on the subject is being used to train chaplains.

"Personally, I believe that anyone engaged in ministry should specialize in prayer," Bornschein said. "The need to pray is as great as the authority of God, who commands us to 'pray without ceasing' (1 Thess. 5:17). Prayer is so vital to all that God wants to do on the earth, and it is so essential to us, that He commands us to do it all the time."

Bornschein contributed the foreword to "Together in Prayer" by Andrew Wheeler, and then wrote his own book on prayer titled "The Front Line: Prayer and Spiritual Warfare." The back cover of "The Front Line" describes it as "a field manual for exploring the depth and power of a praying life."

"The Front Life" went through two editions, then was expanded and re-released as "A Prayer Warrior's Guide to Spiritual Battle." That book is out in a new edition this year, and has been selected as training material for the chaplaincy program at Columbia International University (CIU).

According to Bornschein, "The Front Line" started as a research project called "The Psychosocial Impact of Meditation and Prayer."

"I worked with Glenn Stanton at Focus on the Family to examine studies from the University of Georgia and the University of Florida, which were cited in the Journal of Social and Clinical Psychology," Bornschein explained. "These studies gave both qualitative and quantitative results, from years of research, demonstrating that prayer had a viable impact on individuals' lives and within the society at large. In addition, we used data gathered from thousands of prayer gatherings across the country, and what we discovered was covered in detail within the pages of the book."

"Like a drill sergeant, pastors are given the role of equipping new recruits and giving them the tools they need to become effective soldiers," Bornschein said, paraphrasing Elmore. "Christians are referred to as soldiers of Jesus Christ in II Timothy 2. We are definitely engaged in a war – a war against the darkness of this world, the ways of the flesh and the devil himself. Those who follow Jesus are drafted into the Lord's service, issued spiritual armor and weaponry, and given instruction in effective engagement. This book was designed to be a field manual for prayer."

This training is perhaps particularly important in an American context, where church sermons are generally short and many Christians don't attend church regularly.

"Pastors are expected to train their army in just 45 minutes a week, 52 Sundays each year, or as often as their troops choose to show up," Bornschein said. "Even if the parishioner attends a Sunday service each week, they will receive only 39 hours annually of Biblical instruction and this is less time than most people spend at their jobs each week. So, how do we mobilize Christians to pray? We must equip them. When someone's motivation in prayer comes from love and empathy that is stirred up by the Holy Spirit, they will naturally become more intentional. Therefore, we must do our part to take the depth of prayer, make it tangible and fingertip accessible for those who are ready to take their prayer life to a whole new level."

When it came time to release "A Prayer Warrior's Guide," Bornschein gained new contributions from well-known writers like Dr. Tony Evans and prayers written by Christian leaders like Greg Laurie. Shirley Dobson, who worked with Bornschein when she was NDPTF's Chairman, wrote the foreword for the second edition.

"I had the privilege of working alongside Shirley Dobson for 20 years," Bornschein said. "In fact, I was 20 years old when I began that journey, so I grew up with her as a spiritual role model in my life. She loves this country and, more importantly, she loves God with all her heart. She is one of the most humble, godly leaders in this nation and she believes in the power of prayer. I learned a lot from her. She doesn't endorse books, so to have a foreword from her is very special."

The new content in "A Prayer Warrior's Guide" particularly developed ideas about prayer's impact on families.

"We have added a whole new prayer guide for families with statistics to show the impact of a praying family," Bornschein said. "The old adage is true, a family that prays together stays together. So, we went to work to put together a powerful tool to equip families for this important assignment that will impact generations to come. In total, there are more than 50 new pages of content on this subject matter alone."

Bornschein was particularly glad when CIU selected "The Prayer Warrior's Guide" for its chaplaincy program. The university, started as Columbia Bible School in 1923, offers a variety of Bible- and ministry-related degrees, including Master's Degrees in Bible Teaching and Youth Ministry Leadership. Bornschein hopes that the book fills a gap he's noticed in many schools' theology training.

"Prayer is vital to the health of our nation within families, churches, communities, government and every sphere of influence," he said. "However, training in prayer is not often emphasized in religious or theological programs. Although time is allotted for prayer and liturgical studies, education on prayer from a Biblical understanding is lacking. The National Prayer Committee has worked tirelessly to put resources, like this book, into colleges and seminaries around the world to ensure we are effective in raising up the next generation of spiritually-minded servant leaders. Kirkdale Press and Logos were instrumental in connecting with Columbia International University, and we are grateful to have such a prestigious organization support this project." 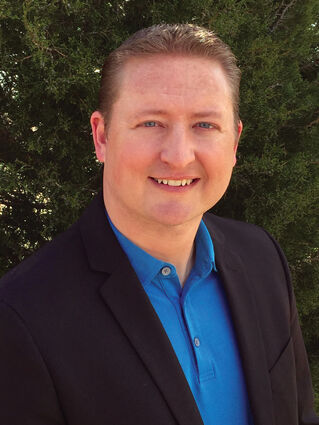 With this new edition out, Bornschein once again added some new material. This time around, the book gained something particularly special for him: a piece by one of his children.

"I am delighted that my daughter, Ashley Bornschein, was able to contribute to this new edition," he said. "There is a new section we call 'A Field Guide for Family Prayer,' and she really captured the heart of this section so well as a product of a family environment that was prayer centric. I felt it was important for our readers to hear from one of my children rather than just take my word for it."

The new edition of "The Prayer Warrior's Guide" is out now and available for purchase through Amazon, ChristianBooks.com and anywhere books are sold.