Flight 585: News over the years 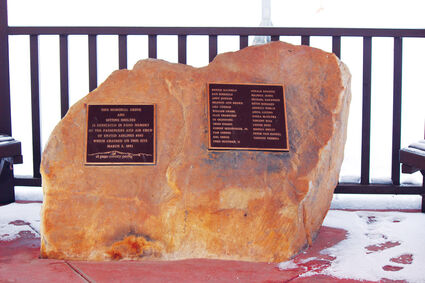 The memorial at Widefield Community Park lists the names of all the victims of Flight 585.

In the days after the United Airlines Flight 585 crash, as well as on various anniversary years, this paper has written many pieces on the subject. The following are selections from those articles, showing coverage and recollection of eyewitnesses over the years.

Here are a few eyewitness accounts included in the March 6, 1991, issue, three days after the crash occurred:

Debbie Park, who was a columnist for this paper at the time, was traveling to church when she saw the plane.

"We had just turned onto Fontaine off of Fountain Mesa and I noticed the plane going overhead," Park said. "I remember I thought to myself, that plane sure seems low... And then we saw it going straight down toward the old creek bed at the park. Just as quickly and as straight as the plane had gone down, up came a monstrous red-devil flame with black carbon smoke surrounding it; it was just a huge fireball that shot straight up into the air."

Pete Neidig and his brother Steve Bench, then living on Drury Lane, remembered coming to the crash site:

"We jumped in my brother's truck and rushed over there," Neidig said. "We were the first ones there. We immediately began picking up debris searching for people under it – everything was scattered all over the place. After we realized we wouldn't find anyone, we tried to stomp out the fire at the edges of the crash. Then the police came and asked us to exit the area."

"I give him all the credit in the world, if he had gone another 50-100 yards [into the apartments], who knows what would have happened – we would probably still be fighting the fires," Shovlin said.

Another firefighter said, "There are no words to describe what we saw and how we felt upon arrival."

"A memorial grove of trees and a contemplative sitting shelter with a plaque is being planned for Widefield Community Park to serve as a living memorial to the passengers and air crew of United Airlines Flight 585... The El Paso County Park Department advised the County Commission that 'the memorial will be befitting of a public park, and will be a respectful remembrance as well as an affirmation of life.' Actual construction and installation of the garden is expected to begin later this spring."

On March 2, 1994, journalist Patricia St. Louis wrote a piece recalling her reaction when she visited the crash scene to get photos and take notes:

"I nearly burst into tears while gazing at the burning mass emitting dark, choking, black smoke which blew across the park in every direction.... It was then that a volunteer firefighter advised my husband and I that we needed to get up to the main road (Fontaine Boulevard) because the smoke from the plane could be toxic and body parts were being found scattered about the park... Later, as we made our way back towards our vehicle, we stopped to cross the little creek that runs through the park. I looked down and saw a little brown shoe. A child's shoe. I hoped and prayed that it had just been lost by some child playing at the park. I was later relieved to hear there were no children on the flight."

On March 7, 2001, the 10th anniversary of the crash, various mourners and eyewitnesses visited the gazebo to tie ribbons on the trees planted for the victims. One of those in attendance was Paul Johns, who remembered being one of the first parademics at the scene:

"[Johns] was directed to search for injuries, and reported that he treated a girl who was knocked off her feet by the impact of the crash, as she watched it happen while standing near the front door to her home at Widefield Apartments."

The 10th anniversary piece also included quotes from Gail A. Dunham, then president of the National Air Disaster Alliance & Foundation. Dunham's ex-husband, Hal Green, was the pilot on Flight 585. Dunham referred to plane design flaws which she believed caused the crash, and her frustration that so far it had not been addressed:

"For 30 years I believed our government was doing everything it could, but that's not the truth. Harold was not there when our daughter graduated from medical school because of it. Shortly after the crash that killed him, I was told that Boeing could not redesign 2,000 737s to fix the fatal flaw. Today there are 3,000 737s and the design changes are long overdue. These planes only have one power unit, they need to have two. If this had been done after the crash of 585, Pittsburgh would not have happened. They knew about that fatal flaw 30 years ago. The final report on Flight 585 issued in 1992 was a sham."

Dunham's comment about the final report refers to a 1992 report by the National Transportation Safety Board (NTSB) which stated that authorities "could not identify conclusive evidence to explain the loss of United Airlines flight 585."

The report included some speculation that a wind condition known as a "mountain rotor" could have contributed to the crash, but it was not conclusive. Dunham's comment about Pittsburgh seems to refer to USAir Flight 427, another Boeing 737 plane, which crashed at Pittsburgh International Airport on September 8, 1994, resulting in the deaths of 132 people.

As a matter of fact, the Pittsburgh incident ended up leading to new information about the Flight 585 crash. Due to similar circumstances and the fact both planes involved were Boeing 373 models, the NTSB used their investigation into Flight 427 to reopen their investigations on Flight 585 and another incident in 1996 that did not result in a crash (Eastwind Airlines Flight 517). After performing new tests and examining other data, the NTSB released its report on Flight 427 in 1999; it concluded that 427 and 585 were both likely caused by a problem with the rudder control system, causing the rudder to go in the opposite direction.

The report also stated the following: "It is very unlikely that the loss of control in the United Flight 585 accident was the result of an encounter with a mountain rotor... The flight crew of United Flight 585 recognized the initial upset in a timely manner and took immediate action to attempt a recovery but did not successfully regain control of the airplane... The flight crew of United Flight 585 could not be expected to have assessed the flight control problem and then devised and executed the appropriate recovery procedure for a rudder reversal under the circumstances of the flight." 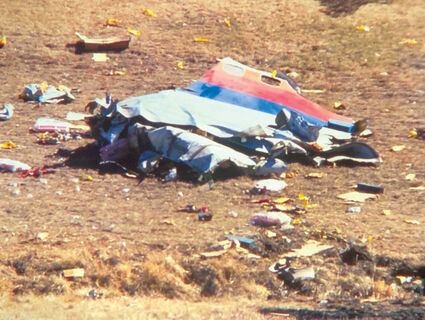 The blue and white markings of the wreckage were one of the first clues to those on scene at the crash of United Airlines Flight 585 in Widefield Community Park on March 3, 1991, that they were dealing with a commercial airliner.

In March 27, 2001, just two weeks after Dunham's speech at the memorial, NTSB released an amended version of the Flight 585 report. It included the new probable cause information, recommendations for Boeing to develop new test procedures for the particular rudder system, and mentioned that new training had recently been developed to counteract some of those problems. While this doesn't clear up whether the power units problem that Dunham mentioned has been addressed, it seems that ultimately Dunham's basic point was right and vindicated.

Today marks the 30th anniversary of the tragic crash. Hundreds of area residents still recall the events of that day, and for some the trauma will remain with them forever.

In the March 9, 2011, issue, Heather Grinde Spainhower shared memories of when she saw the crash take place: "This was the crash that made me afraid to fly – I was still a teenager at the time and my parents' house wasn't too far away from the crash site. I was working on my car in the garage when I heard the plane go over the house, and a few seconds later I heard the loud BOOM. Then the radio announced the crash just a few moments later, and when I went outside I could see the smoke – my heart just sank... ."