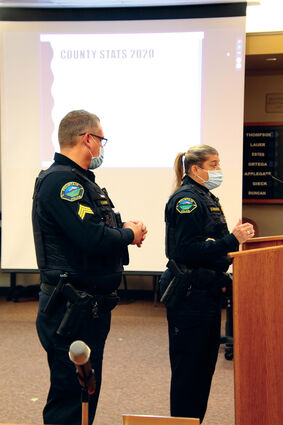 Lt. Missy Reynolds and Sgt. Ken Owens of the Fountain Police Department present the details of the new BHCON program to the City Council on Feb. 23.

Sometimes cops wear so many hats during the course of a shift, that being an expert handler in all types of situations is an impossible expectation, Fountain Police Chief Chris Heberer says. And when young 21-year-old officers are thrust into volatile situations with possibly mentally unstable individuals, they are expected to prevent events from escalating despite having minimal work or life experience with such challenges.

Between January and October 2020, FPD officers – mostly patrol officers – spent more than 1,153 hours dealing with calls of this nature.

It's those types of situations that will benefit from the newly unveiled Behavioral Health Connect Unit (BHCON), pronounced "beacon," at the Fountain Police Department.

"There's no doubt in my mind we'll sit here next year, a year from now, once we get the BHCON active, and there'll be people that will be alive in our community because they got the help that they needed," Heberer said. "Some of them will be military, some of them will be civilians. One is too many, but there is no doubt we will save a few next year."

BHCON is a partnership between FPD and UCHealth Memorial Hospital in which a licensed behavioral health clinician teams up with an officer to assist on calls involving suicide attempts, domestic violence, autistic individuals or any number of other situations where a subject's mental or emotional state may have a major impact on circumstances.

FPD Lt. Missy Reynolds is overseeing BHOCN and says having a clinician there to better assess the individuals and possibly de-escalate tensions for police to better do their jobs will be an invaluable tool. Reynolds noted that these clinicians will not be sent in alone or before the FPD officer assesses the situation to ensure safety of the employee.

Once police and the clinician complete their assessments and wrap up the scene, the clinician refers the case to a Case Manager for follow-up. In serious cases, the clinician can recommend sending a subject to an Emergency Room, placing them on a 72-hour mental health hold or other intervention. Additional referrals for care or services will be made at that time.

Because multiple officers respond to 911 calls, they often get tied up at a scene to provide back-up. Having a clinician on scene frees up those extra patrol officers to attend to other calls.

Sgt. Ken Owens has been selected as FPD's primary BHCON officer. He has more than 27 years' experience in law enforcement, 18 of those at FPD. He has trained in crisis intervention, served as facilitator of such trainings, is a member of FPD's crisis negotiations unit, is the main negotiator for Fountain and works with the county on its regional crisis negotiations unit.

"Ken has the maturity, the patience and the experience to be our best option for this program," Reynolds said. "He was hand selected. We interviewed a lot of people."

Mayor Gabe Ortega said data has proven a need for this type of position, but also that the community wants it.

"This is one of the big things people have been asking for," he said.

He said budgeting money for the job was a "no-brainer," and that he expects fewer people to be sent to jail as a result of the clinicians' expert intervention. A sister program at the county level allowed for 99 percent of mental health calls in 2020 to be diverted from the jail, data showed.

In addition, the sheer number of military service members and veterans with PTSD in the community makes this program a good fit for Fountain, Reynolds said.

Heberer said the clinician will be able to assist the Fire Department on some of their calls, too.

UC Health currently is soliciting applicants for this position, and FPD will sit in on interviews to ensure a good fit for the department. They have "fingers crossed" to have someone on board by April, Reynolds said.

The BHCON unit will be partnered with the already established BHCON program at El Paso County Sheriff's Office, and the two can collaborate when necessary.

"We are modeling our program off of their very successful program," Reynolds said.

FPD's BHCON unit will have office space at the new county Public Health facility on Hwy. 85/87.