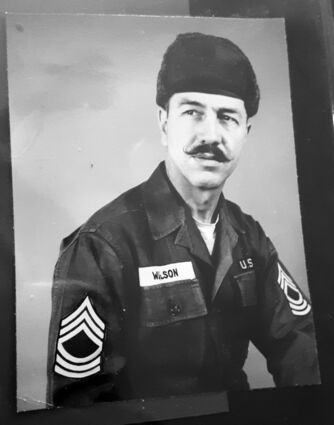 Recently, I sat down to talk with Robert "Bob" Wilson, one of Fountain's oldest, most entertaining citizens.

"Did you know Roy Gray?" Wilson asked me at one point.

I said that I wasn't sure.

Wilson, who turns 98 years old on March 15, was born and raised in Florence, Alabama. He's been a resident of Fountain for decades, and still lives in the home he purchased in 1959. As we talked, he showed me some of his souvenirs, including a photo of him riding his horse, Duke, in an open field. The photo is dated 1961; Wilson told me that the photo was taken just behind his house.

"There used to be an irrigation ditch out there and no fence," he recalled. "When I moved out here, city limits was about 50 feet west of this house and the street ended there."

Early in our discussion, he showed me a large black binder filled with military photographs compiled by his son and daughter-in-law. The earliest ones went back to his days in World War II, serving as sergeant tank commander of a division of tank destroyers.

"We landed at Utah Beach, thank goodness, supporting the 4th Infantry Division," he said. "We were attached to the First Army, but we were part of the Third Army under Patton. Later on when Patton and the Third Army got into France, they moved us back under the Third Army."

He doesn't tell me too much about his combat experience, although he said that his division received a presidential unit citation and served in the Battle of the Bulge. On the lighter side of things was a photo of Wilson in 1961, during his second tour in Germany. He was pictured with a large handlebar mustache, his entry in a contest to see which of the men could grow the biggest one.

"I ended up winning at the NCO club with 9 1/2-inch handlebars," Wilson said, smiling.

However, the mustache didn't last long.

"Right after that picture was made, I went in there and had the barber cut those things off," he said. "The stuff we were using for wax on it was preservative for ammunition, and the stuff got awful sticky."

After three tours in Korea and one in Vietnam, Wilson retired in 1970. He's maintained ties to the military community, attending meetings at the American Legion and other groups. He also plays music with other veterans, including jam sessions at the VFW 6461 on Sundays and playing for events at the Fountain Valley Senior Center. He's also taken part in one-time groups like the Valley Voyager Band to raise money for military and senior citizen causes. He proudly showed me some of his instruments, including a well-kept mandolin he paid 40 dollars for at a pawnshop.

"I take it back to Alabama with me – my cousin played the mandolin, specialized in it," Wilson said. "When we go back there, he sets up jam sessions. So I took it back there and he played it. He said, 'Boy I'd like to have that.' I said, 'I don't want to get rid of it.'"

Wilson also shared even though two of his children are retired music teachers, he's never learned to read sheet music. 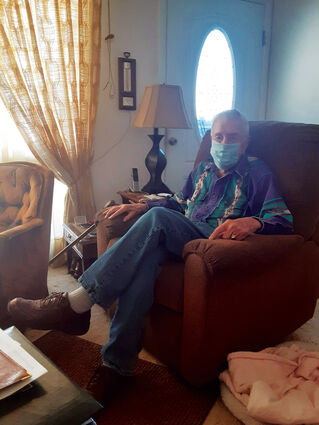 Robert 'Bob' Wilson recently in his house in Fountain where he has resided since 1959.

There were other great memories. He described how his childhood home in Alabama was "about a hundred yards from the Tennessee River," which got him in a lot of trouble for fishing and swimming when he wasn't supposed to. He talked about riding horses as an honorary member of the El Paso County Sheriff's Posse, for which he received a special badge and a bumper sticker. Military police pulled him over for having the sticker at one point, until the commanding officer told them there was nothing they could do about it.

"I'm a reserve member of it," Wilson said with a laugh.

Eventually we reached the point where there wasn't much more left to say. I sat with Wilson, thinking about everything he'd told me.

"I guess I've had a pretty active life," he observed as our interview drew to a close. "I can't complain about it."