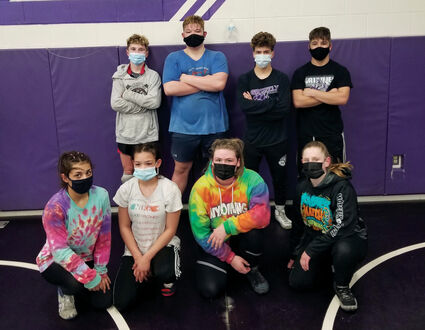 Mesa Ridge High School did well at the regional wrestling tournaments held March 6, with eight of their athletes qualifying for state. From left, the qualifying boys' wrestling athletes are (standing) Mickail Skeldum, Matthew Moore, Frankie Gallegos and Tucker Trevino. The qualifying girls' wrestling athletes are (kneeling) Alexsys Jacquez, Bella Cross, RaeAnna Bristow and Alison Evans. "All of our kids wrestled really well," Coach Rob Braaten said. "All of our qualifiers are freshmen or sophomores so that is exciting. Even our wrestlers who didn't qualify wrestled well. It was easily our best performance of the season. Considering we lost a few weeks of our season, I was proud of how the team responded. It says a lot about the character of the athletes that we have in our program."

The Grizzlies lost 67-54 when they hosted Canon City on Tuesday in a Class 4A Colorado Springs Metro League game.

They finished the week 0-1 overall and sixth in league.

The Gladiators lost 65-52 when they played at Harrison on Tuesday in a Class 4A Colorado Springs Metro League game.

They finished the week 0-1 overall and fifth in league.

Against Harrison, Braxton Burrows led the team with 16 points.