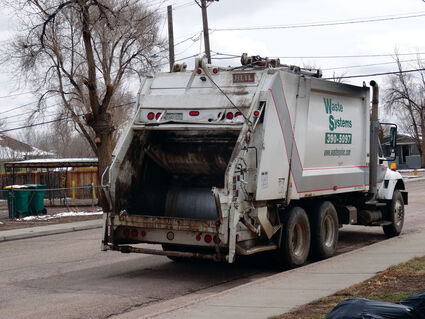 A Waste Systems, Inc., truck makes the rounds in downtown Fountain on Monday. Waste Systems is the last locally-owned waste hauling company in the area.

Prompted largely by concerns over the effects of multiple garbage trucks in and out of neighborhoods each week, Fountain is raising the possibility of moving to a single-hauler system once again.

To lay out results of the city's research and accept questions and input from the community, officials will hold a series of meetings to get it all out in the open.

"This is just a research process right now," Deputy City Manager Todd Evans explained during last week's City Council meeting. "It's our responsibility to go out and find opportunities and find different options for the citizens and the elected officials to look at, and that's all we're doing. But if it doesn't come out where the numbers make sense and the people get savings ... well, then we'll come back to you with those results, but no decision's been made; we're still researching."

Two sessions – one on Monday, April 5, and one on Friday, April 9 – will be held at 6 p.m. in council chambers at City Hall, 116 S. Main St., with live webinar access to those who wish to participate remotely. Attendance will be limited due to COVID-19 guidelines, so an RSVP to attend in person is required by calling (719) 322-2019 or 322-2000. Registration for the webinar may be made via the city's website, fountaincolorado.org.

Once all the comments and questions from those meetings have been collected, the city will hold a virtual question-and-answer session online to address further comments. Videos of the first two meetings will be posted online for the community to view before the final Q&A, which will be online only on May 12.

"You don't necessarily need to be present at those meetings to engage," City Attorney Troy Johnson said.

The city initially raised the issue in July 2019, with mixed reactions from the community. Johnson said the input collected at a series of meetings back then, along with additional information gathered in the interim, have prompted officials to give the idea another look.

"It's still an idea that makes a lot of sense to the staff," he said.

The citizen-led Roadway Focus Group raised the issue a few years ago, and the city researched it and discussed it with other cities that have already done this. City Council reviewed results of the RFP in January 2020, but then COVID-19 derailed the process.

According to a report compiled by city staff, bids receiving in 2019 from area trash haulers to provide single-can service as well as recycling generally came in cheaper than the estimated current rates based on a survey of Fountain bills.

Wrapped into those bids was an infrastructure fee that the city could bank into the streets fund.

Johnson noted the amounts in those bids could be different now, especially since COVID-19 changed many aspects of the business landscape, and because some of the trash companies have since been bought out by larger national chains.

"It makes sense to go back and get more accurate numbers at this point," he said.

Johnson claims this process forces "all of the haulers that operate in the area to give us their absolute best price. We're basically doing the negotiation for our residents."

Chris Pyle, general manager of the family-owned Waste Systems, Inc., based in Security said his company has already received feedback from customers that they're unhappy about the proposal. As the only remaining locally owned trash service, Waste Systems has been a vocal opponent of the single-hauler idea.

"I've told them all along, if you want to do it, put it up for a vote," Pyle said. "Let the people decide."

How the decision will be made is not yet clear, although so far no one has suggested a public vote.

"It's about revenue," he said. "That's all this has ever been about."

He suggested the city simply require a fee for any hauler to do business here, allowing any of them to continue servicing the area while generating that revenue. In fact, the current proposal does incorporate this concept.

Pyle said the reasoning given by the city in past presentations – that garbage trucks damaged city streets – made no sense to him. Using Cross Creek as an example, Pyle noted that it is an HOA with a single-hauler but that it still has significant road damage.

City officials countered that they are not blaming garbage trucks for all of the existing road damage; in fact, they have admitted the city was lax in the past with regard to holding road construction to a high enough standard. However, they said the existing problem streets will only get worse the more trucks traverse them.

City staff's presentation argues that truck traffic is significantly more damaging to roads than average passenger vehicles, and it's not helping the situation. They say a single-hauler model would reduce noise pollution, may increase recycling among residents, reduce environmental impact and force competition to ensure decent rates.

Mayor Gabe Ortega responded to comments made on the city's Facebook page claiming that the city was getting kickbacks from the single-hauler plan.

"There are no kickbacks, there's nothing special the City Council is getting for this," he said. "All the things that are on there that people think they know, they don't."

Ortega added that he has received numerous requests in favor of the single-hauler system. He said a frequent comment he hears is from people who moved here from other regions and are surprised at how many garbage companies they have to choose from.

In addition, he said this plan could generate revenue to help fix ailing roads – for which Fountain has little budget. With the expiration of a portion of the street tax last year, and a resounding "no" vote by Fountain residents to extend it, fees from this proposal could be part of the solution.

"We have a lot of people who complain about our roads, even though they don't want to vote for a little bit of taxes to fix the roads," Ortega said. "So we're looking at ways we can mitigate the damage to our roads, and this would be one of them."

Some residents have voiced support for the measure in public forums, citing the possible reduction in trash bills and potential for improving roads and decreasing traffic and noise. Others are curious about the idea but uncommitted. Another segment of the population opposes any changes to trash service, particularly residents who are loyal to a certain company and don't want to change their provider.

Ortega said the city is interested in this idea "if it's going to save taxpayers money" and that residents' ability to choose a particular waste hauler will remain an option – albeit with an added fee.

Johnson said those additional companies would have to pay an "infrastructure fee" to do business here; that, of course, may be passed on to customers.

The RFP includes a point system for bidders and being a local company would add points, officials said.

The detailed feasibility study that lists rates, pros and cons and other information is published on the city website. Residents are encouraged to review that first before attending the meetings, and waste companies are expected to attend as well.

"I do want to implore everyone who's going to attend that to come with an open mind," Ortega said. "Come with good ideas. And if you think you have a better idea, then put it out there. We're always open to anything and everything. This is meant to be a public process."

Johnson said the goal over the next several weeks is to generate as much public input as possible.

Johnson directed people to attend the meetings virtually or in person, and then submit questions and comments via the website.

"And then depending on how that goes, then we can come back to the council and present steps moving forward," he said.