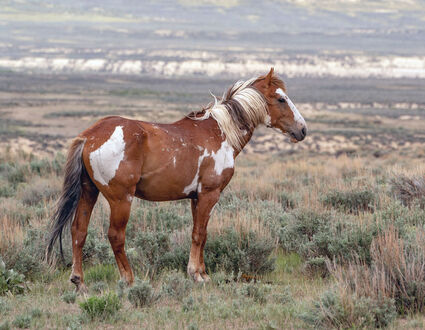 Van Gogh, a 6-year-old stallion sired by the famous pinto Picasso, was killed after being hit by a vehicle along a Colorado highway last year. Updates on safety and range improvements and photos of other wild horses are featured on pages 18-20.

Over the past few years, this newspaper has featured several articles and numerous photos about the wild horses of Sand Wash Basin in Northwestern Colorado.

In December 2017, Cindy Wright was giving me a personal tour of the approximate 155,000- acre Herd Management Area (HMA) the horses live in, when she received a phone call about a deceased horse seen near the highway.

There's an unfenced seven-mile stretch of Highway 318 that runs through the southern-most boundary of the HMA. Some of the wild horses come down to the highway to graze the taller grasses growing by the road, especially during the winter months, putting themselves and motorists in danger. The other three sides of the HMA are fenced.

Wright and I went looking for this horse and found a deceased pinto stallion, named Kiowa, who had somehow ended up behind a fence on the opposite side of the highway outside the HMA boundary. (I had enjoyed watching Kiowa earlier that year interacting and playing with a group of bachelor stallions.) At that moment, seeing him lying there out of bounds, I decided I wanted to do whatever I could to help with getting a fence put up to protect these wild horses and keep them from being killed on the highway.

Wright and her sister, Aletha Dove, co-founders of Wild Horse Warriors of Sand Wash Basin, (WHW) had previously found horses killed by vehicles (both semi trucks and passenger vehicles) traveling along the highway. Fortunately, no motorists have lost their lives.

According to Dove, in 2012 she saw three stallions within 10 feet of the highway. After that, she started calling the Bureau of Land Management Snake River Field Office (BLM) and Colorado Department of Transportation (CDOT), reporting horses on or near the highway, sharing her concerns for the safety of both horses and motorists. From that point on, whenever she would see wild horses on the highway, she would call them.

Dove pointed out, "There weren't any road signs back then warning motorists of the horses."

It was because of continued horse fatalities, Dove and Wright co-founded WHW with the intent to work towards getting a fence put up along Highway 318. WHW is a group of volunteers working together with other individuals and organizations to ensure the wild horses are healthy and safe and to help maintain a healthy and safe range for them.

WHW approached BLM, CDOT and the Moffat County Commissioners, trying to get meetings scheduled to discuss the need for a fence to be put up along the north side of Highway 318. After several meetings with different agencies and being told no, WHW asked if they could pay for and install the fence and were still told no.

At a joint agency meeting in December 2018, WHW was told there were no funds available in the budget to install a fence. WHW offered to pay for the fence stating they could raise $100,000 in donations to fund the fence, a quote they had gotten previously to install the fence.

I was in attendance at that meeting and it looked like the fence might become a reality. Studies still needed to be done on the easement along the highway and the different agencies agreed to meet the following year for further discussions.

After leaving that meeting, I drove out to see the wild horses. Sadly, my friend Angie Lewis and I found a black yearling filly who had recently been killed by a vehicle.

It wasn't until last October that the momentum changed. Van Gogh, a 6-year-old stallion sired by the famous pinto Picasso, was found by the highway after being struck and killed by a vehicle near the entrance to Sand Wash Basin. 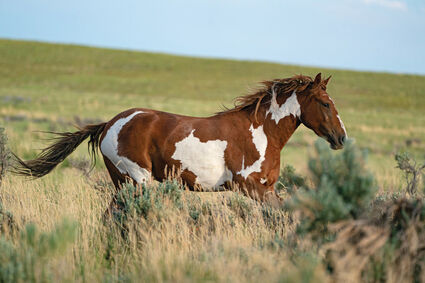 "The public outcry was such that officials could no longer delay moving forward with a fence, especially since WHW had agreed to pay for it," Wright shared.

CDOT has to complete an archeological and an environmental study of the right-of-way where the fence is going to go. Once it is completed and the ground is dry enough, work can begin on putting up the fence.

"We're hoping it will be completed this summer," said Wright. "The fence will help keep the horses and the people driving along the highway safe."