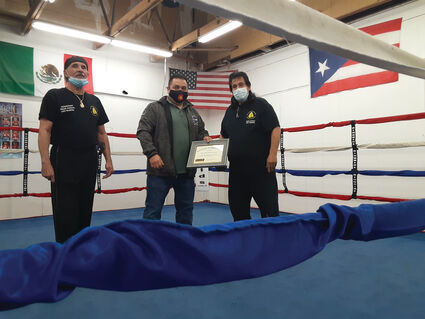 From left, Assistant Coach Leo Rivera, Fountain Mayor Gabriel Ortega and Coach Joe Ybarra with the certificate of appreciation that Ortega got from Ybarra's Boxing Club on March 17. Ortega was initially supposed to receive the award with several other civic leaders last week (March 16) but was unable to do so. Coach Ybarra thanked Ortega for all his service to the community and gave him a tour of the facility. After the presentation, Ortega spoke with various boxers and took pictures with notable Club members, including Luis Joe Ybarra Jr. and three Club athletes (Cesar Burrola, Jaxson Robles and Raul Lopez) who will be in Shreveport, Louisiana starting March 25 to compete in the 2020 USA Boxing National Championships.