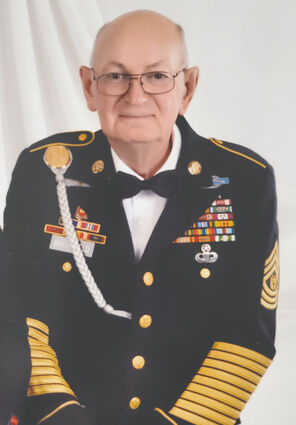 Command Sergeant Major Kermit "KW" Birchfield, 81, was called home to join his beloved wife of 53 years on March 15, 2021. KW died at a local hospital in Colorado Springs, Colo., with his children by his side. KW was born in West Virginia on March 15, 1940. He is preceded in death by his parents, two sisters, and his devoted wife, Juanita.

KW joined the Army at the age of 18 and served his country for 30 years. He retired with full honors in 1988 at Fort Carson, Colo., as CSM of the 4th Engineers. He served as a Combat Engineer with multiple tours in the Vietnam War. While serving he had the pleasure of being assigned to the 101st and 509th airborne divisions. KW had the distinct honor to tour Germany and Italy for many years as part of his military career. He also served as the state advisor to the National Guard in Arkansas and North Dakota along with his many stateside duty assignments.

He loved his country and was proud to serve for so many wonderful years. His distinguished career included these, among other honors: Bronze Star with two Oak Leaf Clusters, Vietnam Campaign Medal, Vietnam Service Medal with six Bronze Service Stars, and Jumpmaster. After his military career he went on to work for Wal-Mart for 23 years before his second retirement at age 73.

KW and his wife, Juanita, enjoyed every part of his military career. They were married in 1968 and their amazing adventures began.

They leave behind five wonderful children: Leonard (Nita) Birchfield, Kenneth (Cathy) Birchfield, Jennifer (Matthew) Langley, Steven (Crystal) Birchfield, and Steffeni (Jason) Boyer; 13 loving grandchildren, and eight granddogs. He also leaves behind his faithful companion, cat "Mittens." They also leave behind many, many close and adopted family members the military and Wal-Mart family gave them. No one was ever a stranger for long. No words can express the deep loss our family is going through losing both pillars of our family so close together; we will never forget how many lives they have touched throughout their journey, and for that we will always be blessed.

Please join the family for a Celebration of Life on Saturday, April 24, 2021, from 1-4 p.m. Service will start promptly at 1:30 with military honors, at Hillside Gardens & Events Center, 1006 S. Institute St., Colorado Springs, CO 80903. Our father loved his country, and we want to honor every person who has served their country; we ask everyone who is or was military or first responder to wear your dress uniform so we can not only honor our father, but you as well.

In lieu of flowers, the family requests contributions to be made in his name to the Wounded Warriors Fund or your local Humane Society/ASPCA .

"The brave die never, though they sleep in dust: Their courage nerves a thousand living men."