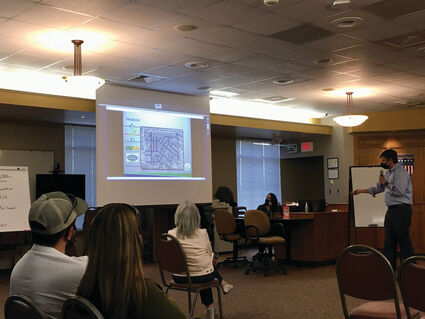 Despite hundreds of comments on the topic circulating on social media, only seven members of the public attended the in-person portion of Monday's meeting about the city of Fountain's single-hauler option for trash and recycling services.

Deputy City Manager Todd Evans and City Attorney Troy Johnson hosted the session to present the city's findings and recommendations, and also to answer questions from the public. Although 26 people tuned in virtually using the webinar feature and asked numerous questions (another 25 registered but didn't attend), several of the in-person seats that had been set aside for people who RSVP'd remained vacant the entire time.

"This isn't unusual when we have community meetings," Evans said.

Nevertheless, the small group went through a large amount of information over the course of the evening.

"We thought it was a good meeting, and we appreciated all the comments and questions," Evans said.

Several individuals participating online voiced interest in the proposal if it meant saving them money and lessened traffic in their neighborhoods. However, most in-person attendees voiced opposition to the single-hauler idea.

"I say we leave it like it is and the city stay out of our business," David Ellis said.

Others in attendance said they preferred to support their existing waste hauler, and some questioned the feasibility of one company even being able to handle the entire city's population. Fran Carrick explained that as a small business owner herself, she thinks the prospects of a locally-owned hauler being able to have a real shot at it are slim. Instead, she suggested the city allow all haulers to continue business as usual but with an additional fee for doing business in Fountain, since generating revenue for road maintenance is one of the goals of the single-hauler proposal.

During his presentation, Johnson identified four possible outcomes after the city completes a series of public meetings:

1. The City Council rejects the plan and does nothing.

2. The council approves the single-hauler plan.

3. The council refers the matter to a public vote.

4. The city simply implements a fee for all haulers doing business here.

Johnson said city staff reasoned that the final option would not be desirable because it only solves part of the problem – how to increase revenue for roads – but possibly creates an even bigger problem for residents by increasing rates.

Some in attendance seemed more concerned with choosing their own hauler than any potential rate increases they might experience as a result of haulers having to pay fees to the city.

Johnson said the city's analysis of the proposal identified several advantages, including reduction in traffic and damage to streets; less noise; and decreased pollution.

"Kids playing sports in the street, they have to move every time a trash truck comes along," he added.

Another selling point is the fact that bids from several waste haulers to offer citywide service (which included a mandatory infrastructure fee that would go toward the roads fund) generally came in lower than average residents' actual bills. Since voters rejected a slight sales tax increase to fund roads in 2019, the city is trying to find other ways to generate revenue for those projects. Decreasing rates for residents while still generating much-needed revenue for streets seems like a win-win to city staff. But residents countered that some other factors they brought up should be considered - primarily residents' freedom of choice and supporting locally owned businesses.

The city continued to face complaints that residents would be forced into the single-hauler plan, despite several explanations that residents may continue to use any service they wish. An additional fee the city would charge those other haulers could trickle down to customers' bills, though.

"So you may see your rates go up; that would be up to the hauler," Johnson said.

In addition, Johnson noted that if a single-hauler system is adopted, residents would be referred to the selected waste company to set up service; it would not happen automatically.

"The hope is that you would see the cost savings and opt yourself into it," he said.

Q: If the chosen hauler provides bad service, are residents stuck with it? A: Because the hauler would contract with the city, the city will have some "quality assurance" oversight. In addition, after the contract term is up, unsatisfactory haulers may be eliminated.

Q: Isn't it unfair to target only garbage trucks? Shouldn't all heavy trucks and equipment be subject to fees to help share the mitigation costs? A: The city has done some work to try to reroute trucks, but there certainly may be more options worth pursuing.

"We're not ignoring all those other ones, but for now we're trying to focus on this one," Johnson said.

Q: What if the selected hauler decides to raise rates? A: Under a city contract, rates would be locked in for a certain period of time. Upon expiration, the contract would be renegotiated with future increases capped at an amount of the City Council's choosing, probably in the 1-2 percent range.

Q: Is the anticipated reduction in truck traffic worth it? How much of a decrease is expected? A: Although exact numbers are impossible to predict, officials believe a single-hauler system would result in a fraction of the current amount of garbage truck traffic in residential neighborhoods.

Q: Does this apply to commercial customers? A: No, this only applies to single-family homes and duplexes, not larger multi-family or commercial properties.

Q: What is the best way for residents to share their opinion with the City Council? A: Attend the next meeting, Friday, April 9, at 6 p.m. in council chambers; also, type comments on the city's website under the "Single Hauler" category of the "What's New" section, which is found on the main page: http://www.fountaincolorado.org. Residents can enter their own comment or read the previous comments of others. 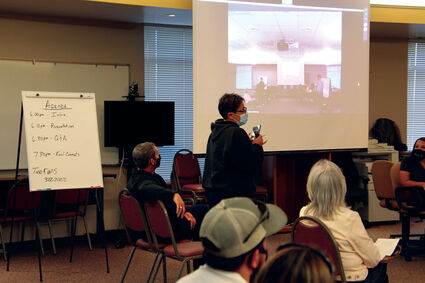 Several members of the public provided comments at Monday's meeting about trash haulers. Another meeting is set for this Friday at 6 p.m. at City Hall.

The full feasibility study prepared by the city, with bid results and other data, is available on that site too.

The video recording of Monday's meeting is posted online for anyone to view for the next few weeks. Friday's meeting will be recorded as well. To attend in person, call 719-322-2019 or 719-322-2000 for a seat reservation. A link to the webinar will be posted online.

Once all the comments and questions from those meetings have been collected, the city will hold a virtual question-and-answer session online to address further comments. Videos of the first two meetings will be posted online for the community to view before the final Q&A, which will be online only on May 12.

Officials said City Council would be reviewing all comments and questions in all of these forums before continuing to discuss the matter. A decision would not come until they have had additional conversations at the council level.