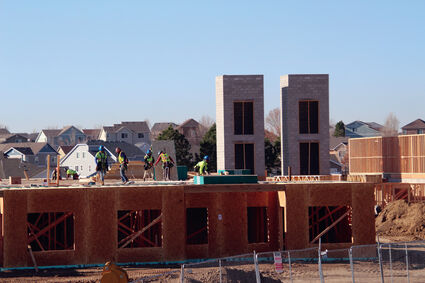 Construction on the Villas at Mesa Ridge senior apartments is progressing quickly. This is one of several developments either in progress or planned around Fountain, according to city officials.

How will Fountain handle future development proposals? What if adequate roads and utilities aren't available when developers want to build? How will public safety personnel be able to meet the needs of a growing population?

Those are just a few of the questions city staff and elected officials have started discussing as they gear up for a major update of the city's Strategic Plan, and they will spend the next year narrowing down the most critical challenges and identifying potential strategies to deal with each specific area before adopting the document for 2022-2024.

During extensive reports from each of the city's department heads at a City Council work session last Wednesday, the overarching theme that surfaced was that future development must take the lead in financing additional utilities and roads when existing infrastructure is lacking.

City staff provided updates on current and proposed developments, noting that some have been in the pipeline - at least conceptually - for many years, and some won't proceed until several more pieces of the puzzle fall into place.

However, several have begun construction or site work this year, including the Villas at Mesa Ridge senior apartments east of Safeway. Work on the site is progressing rapidly. Down the road, much site work has been visible in preparation for Mesa Ridge Crossing, which will be home to a Maverik convenience store, Quick Quack Car Wash, Discount Tire and - just announced - a Dutch Bros Coffee shop.

Planning Supervisor Kristy Martinez said the Ventana subdivision in south Fountain, which is built out in its existing six filings at 380 homes, intends to add land to its southern boundary to expand in the near future. Townhomes on East Ohio Avenue are another planned housing project that's imminent.

Lastly, she mentioned that an 1,800-unit housing development called Corvallis - formerly known as Singer Ranch - looks to be starting up soon. The 275 acres is located south of Fontaine Boulevard and west of Marksheffel Road. The property was previously annexed into the city of Fountain and approved as the "Crescent Heights" PUD in 1989.

According to planning documents, "The proposed Corvallis ODP and PUD will retain the original zoning and permitted land uses of residential (single-family and multi-family), commercial/ office/ retail, open space and parks, and a school site."

Meanwhile, Riverbend Crossing - the new residential and commercial development set to replace the former Fountain Valley Shopping Center on Hwy. 85/87 - is in the end planning stages. Once the developer submits final documents to the city, construction could get under way soon. That project will include various retail and commercial businesses along Hwy. 85/87, with roughly 200 single-family homes in the back toward the west.

City staff insisted that every single project that comes forward with an application receives interdepartmental review to determine how it would impact various city services and resources. Staff and council members said collaborating in these discussions was key to warding off any unwise decisions, such as approving a project when inadequate water supply might become an issue. That tactic likely would be even more crucial in the next version of the Strategic Plan as Fountain sees continued growth.

"I just really appreciate that all the departments are overlapping at looking at this," Council Member Sharon Thompson said.

Water is one resource the city is scrutinizing closely. In fact, Fountain Utilities is in the middle of a Water Master Plan to fully study the true capacity of water supply. Although Utilities Director Dan Blankenship, who's been in the position less than a year, says current supply is "more than adequate," some of the projections used in the past were more anecdotal than scientific.

He said the city is looking at short-term and long-term options to increase supply in a sustainable manner. A rush of development proposals in recent months caused Utilities to question two criteria: 1) whether there were pipes in the ground to serve the build, and 2) whether there really is enough water to run through those pipes.

Blankenship said he anticipates completion of this study in early fall of this year.

In addition, he said the city has begun a new practice of requiring developers to pay for significant infrastructure improvements up front. The city will reimburse them with funds from connection fees upon completion, which is reverse from the former practice where essentially the city acted as the "bank."

He said there are no plans for a water rate increase at this time, and no plans for forced water restrictions for residents this summer. In the past, voluntary restrictions have been effective at maintaining adequate supply.

A primary goal in looking at future development and a policy vision, Blankenship said, is to ensure current ratepayers do not bear the burden of additional building.

Similar strategies would be enacted for public works and roads, Evans said. In fact, the city was pleasantly surprised when the company proposing to build 336 apartments south of Mesa Ridge Parkway volunteered to pay for a completely new signalled intersection at a future connection of Metropolitan Street east of Mesa Ridge High School into Mesa Ridge Parkway. However, at this time the Colorado Department of Transportation is not on board with this plan.

Evans noted that the city is ready to proceed with the Indiana Avenue railroad crossing quiet zone project. Also, a span-wire signal is planned for Jimmy Camp and Ohio.

Again, one of the big questions the city will ask when a developer wants approval is whether transportation infrastructure already is in place. Evans said the developer would need to make any additions that are necessary.

"We are still working with a very old perception that Fountain is not collaborative," she said.

She noted that despite recent and upcoming additions to the landscape, there is a large amount of untapped potential, including: the "opportunity zone" along Hwy. 85-87, Olde Town, the Gateway District and the Pikes Peak International Raceway (PPIR) area. The land around PPIR would be ideal for tourism and events developments, she said.

All of these issues and many more will be discussed over the next year as the city develops its next Strategic Plan, Communications Manager John Trylch said. Last week's session was for identifying current and potential trouble spots; upcoming meetings will address ways to handle those within the scope of the city's overall vision statement and "enduring interests," which are not anticipated to change.

Those enduring interests are:

• Responsibly implement improvements to City infrastructure and services that facilitate and enhance safety, accessibility and steady economic development for all citizens.

• Always honor and include Fountain's many military residents, supporting their mission to defend our nation, through provision of quality City services and a welcoming sense of home for service members and their families.

• Capitalize on opportunities that conserve our natural open spaces and recreation options that the Fountain community enjoys. 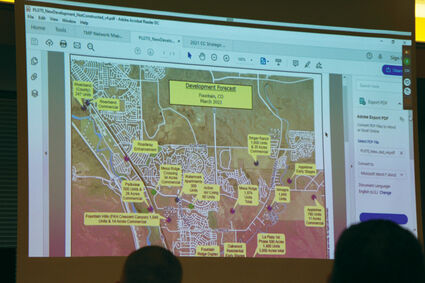 Members of the Fountain City Council and city staff review current and proposed developements around Fountain during the council's work session on a new Strategic Plan last Wednesday.

• Deliver local governance that is collaborative, inclusive and engaging on topics important to the Fountain community.

Trylch noted that within the city's four strategic priorities in the 2019-2021 Strategic Plan (improve transportation infrastructure, improve access to telecommunications technology, assess distribution of public safety resources, and expand recreation offerings), 13 of the 23 specific objectives had been completed; a few had been amended due to various circumstances, and the others are on track for completion soon.

Coming up in next week's issue, a look at how other departments such as Public Safety, Recreation and more are reporting their recent progress and challenges they anticipate facing in the next few years.