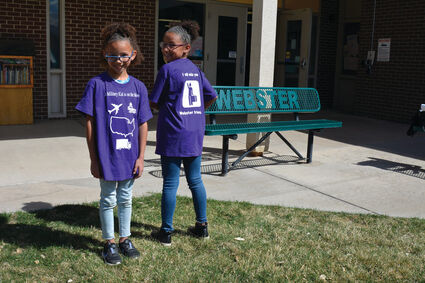 Makayla and Nevaeh Kyser, students at Webster Elementary School, received purple shirts that read "A Military Kid is on the Move" on April 7. This marked a new tradition at the school, suggested by Webster's Military and Family Life Counselor (MFLC) Monica Wilcox, to recognize students of military families on their last day and wish them well.

U.S. Department of Defense Secretary Casper Weinberger designated April as Month of the Military Child in 1986. To this day, it presents an important opportunity – especially in places like the Fountain Valley with large military populations – to consider not only the sacrifices that military families make, but also the unusual experiences that they have.

Madilyn Waugh, a student at Fountain Middle School, talked about her experience. Her father, John, enlisted in the U.S. Army during the Desert Shield/Desert Storm period, he and his wife Jackie had two children before he commissioned again. After his second commission, Madilyn was born, and she has been around the military her entire life. Their family is getting ready to do their twelve Permanent Change of Station (PCS) time this summer.

"John and I have been stationed in six different duty stations – two of which we were stationed multiple times," Jackie said. "Madilyn has been with us for four of those duty stations and five moves."

Like many military children, Madilyn has found the relocation process difficult, but found it has positive effects too.

"The most challenging part has been not going to the same school district my whole life and knowing people from kindergarten or younger grades that I will graduate with," Madilyn said. "[However] I am kind of glad that I don't have that, because I have gotten to meet some of my lifelong friends through all of the different places we have been."

Madilyn has also found ways to compensate for the downsides of relocation.

"I am lucky that I live in a time where contacting friends is as easy as the press of a button," she said. "Because of that I have been able to keep in touch with many friends from when I was younger. I am also lucky that my family has always been there for me no matter what and I can always count on them for anything."

Over time, Madilyn has even found some important lessons from these various transitions.

"One thing that relocation has taught me is that most everything is temporary," she said. "I have overcome most of these changes by finding things that I enjoy in each different duty station. Doing this helps me find more people who are interested in the same things I am and this makes it easier to make new friends. These challenges have also made my family and I closer together because the only people who truly will understand what each of us is going through is each other. I also use music as a way to overcome things. Sometimes if I am feeling uncertain, worried, or sad about something I listen to or play my own music and it helps me to think things through or realize that there is someone out there who understands what I am going through."

That need to maintain close connections with people who understand is perhaps especially important because at a certain level every military child's story is unique.

"I wish that more people knew that being a military child is not the same for everyone," Madilyn said. "Many kids have to go through not having one or possibly both of their parents not being around much because they are deployed. Some kids even have to go through losing a parent. I am one of the lucky few that do not remember when my parent was deployed and get to see them nearly every day. Many people automatically assume the worst when I tell them my Dad is in the military, but it really is not that bad."

Local schools help get the word out about military child and their unique stories through various events held in April. Fountain-Fort Carson School District 8 (FFC8) and Widefield School District 3 (WSD3) celebrate Purple Up Day on April 16 to recognize military families. FFC8 also supports the Veteran's Voice monthly podcast, which addresses questions that former military personnel and their families have. Staff and students are encouraged to wear purple on that date.

"We were invited by Mt. Carmel to be part of the podcast this month, since their topic was going to focus on Month of the Military Child," FFC8 Communications Director Christy McGee explained. "Dr. Romero, our Deputy Superintendent, spoke about all the services we provide due to having a heavily impacted district, and thanks to our partnership with Fort Carson."

To listen to Dr. Romero's interview on Veteran's Voice, go to krdonewsradio.podbean.com/p/the-veterans-voice/.

Individual schools also have their share of special events. For example, Sunrise Elementary (in School District 3) holds a spirit week April 9-16, which includes Purple Up Day as well as days where students wear stars and stripes or red, white and blue. Webster Elementary began a tradition this year of giving students from military families special purple shirts on their last day of school before they leave for their next assignment. The shirt has the words "A Military Kid is on the Move," as well as pictures of an airplane, map, and moving truck on the front, with "I will miss you Webster friends" and a picture of a person waving goodbye on the back.

"The color purple represents military children," WSD3 Director of Communications Samantha Briggs explained, "The purpose is to help military children feel loved, appreciated and confident about their next move. This is also an opportunity for staff and students to recognize the student's last day and wish them well."

"It's a way to show gratitude to our military families," Bonds said. "We hope it helps them remember their time here and Webster." 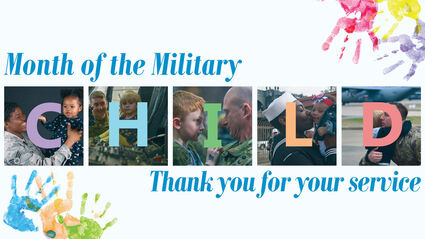 This graphic was created in recognition of the Month of the Military Child. It was used on social media in appreciation of the sacrifices they make.

Local military bases are hosting several events for military children this month. Fort Carson will have several special events at its two Child Development centers. East CDC will be visited by the Army Band on April 16 and see a show of Calvary Horses on April 26. Monarch CDC will see Fire Trucks on April 15, Tactical Vehicles on April 21 and Military Police Vehicles on April 27. Meanwhile, Peterson Air Force Base will hold a door decorating contest, a masquerade ball, a gratitude garden and a community library grand opening as part of the garrison's month-long Month of the Military Child celebrations.

A few other local groups are also planning some events. The Fort Carson & Colorado Military Spouses Facebook group (facebook.com/FtCarsonFamilies/) will hold a drive-in movie night for military kids on April 23 at the Fountain Valley Salvation Army.