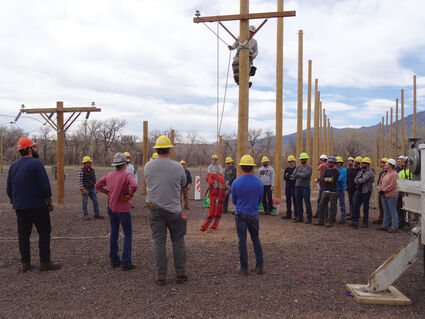 Climbing wooden poles to work on electrical lines is no joke. Karl Shafer, a retired lineman (or in modern parlance a "line technician") who teaches at Rocky Mountain Lineman School (RMLS), tells an interesting story about another lineman who visited one of Shafer's classes. The retired lineman had electrical burns on his leg, and had lost one of his hands, which was replaced with a hook. According to Shafer, the man started with a funny story about trying to make a peanut butter and jelly sandwich for his daughter with his hook and then told the class earnestly, "You're not the one that pays when you make a mistake. Your children pay too. Your family pays."

Those sort of sobering lessons are vital to training linemen. The lineman trade has a long history in the area, which was commemorated in Oct. 8, 2020, when the Fountain Electric Department unveiled a statue of a lineman to celebrate 100 years of providing service.

Pinello Ranch has been home to RMLS since it started in 2008, and the school is operated through Colorado Springs Utilities (CSU) in conjunction with Pikes Peak Community College and Trinidad State Junior College. RMLS is one of two lineman training schools in the state and hosts two classes per year, each lasting 16 weeks.

Up to 35 students will take part in a given class, mastering 50 tasks that a lineman has to do on any given job. Much of the training takes place on wooden poles set up on the property, which range from 5 feet to 60 feet. Students are given the option to drop out during the first two weeks without paying tuition, although they then have to resell equipment they've purchased for the class.

"Right now I think we counted, CSU has 28 or 29 that came out of this class," Shafer said. "It's worked out very well, it really has."

The classes cover a variety of important tasks, such as the classic "hurt man rescue" exercise where students learn how to tie a rope around a dummy and safely lower it. This exercise comes in handy when rescuing other people who have passed out on poles. Natalie Watts, senior public affairs specialist for CSU, said that two CSU employees used this technique several weeks before to rescue a homeless man who had climbed up a 70-foot pole.

Despite its inherent risks, the job provides great opportunities for people willing to do it. Most linemen make over $30 per hour (ZipRecruiter lists the average hourly salary as $34), and the demand for new workers is high. Shafer said that there are roughly 110,000 linemen nationwide, which makes it a small community.

Carl Christian, a second-generation lineman who works as deputy manager at City of Fountain Utilities, said that it's not uncommon to meet linemen who have made the work into a multigenerational family business, with word getting passed on within families.

As a result, outsiders often don't know much about lineman training but the schools tend to be well-known within the community. RMLS has benefitted from this tight network in many ways. Christian said that Fountain Utilities makes a point to attend job fairs and other events at RMLS, and has benefitted a lot from its students.

"The majority of the people we hire are from that school," Christian said.

Shafer said that it's not uncommon for him and other instructors to get calls from past graduates asking about new hires or for recommendations. All these factors added together mean that most RMLS students find work quickly.

"It's recession-proof, it's COVID-proof, because people need their power," Shafer said.

Instructor Kelly McGillivray observed that there seems to be a particular spike in interest the last couple of years.

"We've got 15 on the waiting list right now," McGillivray said, "That being said, this is pretty early. We don't start the next class until August. When I first came, the class wouldn't even be filled for a week before or two weeks before sometimes. So it's great, it's really changed the last couple of classes."

McGillivray thinks that several changes nationwide and within Colorado are creating a special demand for the work. First, there's a generational shift taking place, with many older linemen retiring and new ones needed to come in. Second, the plans to shut down coal plants in Colorado and install wind and solar plants in open land areas mean that new power lines have to be installed – which means the state needs more linemen to install those lines. Some of this demand is being met by former coal plant employees looking for new careers, but that varies depending on whether they're able to learn the new skills.

While the job seems to attract mostly men – instructors said they've had perhaps five female students over the years – there are two female students in the current class, who Shafer said were both doing excellently. There was a sense that the tough nature of the work left little room for prejudice, only whether or not people were willing to do the work.

"You'll notice that we've got every flavor of person here," Shafer said, gesturing at the crowd of students.

Rocky Mountain Lineman School's current class will graduate April 30. To find out more about the school, go to Trinidad State's web page for the course (trinidadstate.edu/line-tech/index.html). 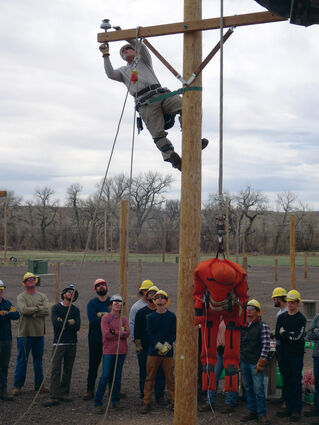 Students participate in training at the Rocky Mountain Lineman School on the former Pinello Ranch property in Security on April 5.

Pinello Ranch, located on the west side of Hwy. 85-87 just north of Venetucci Farm, was founded in 1912 by Alfonso and Angelo Pinello, Italian immigrants who originally came from Rome. Alfonso was married to Blanche Venetucci, whose family also has history in the area (Widefield School District 3’s South Elementary School, founded in 1957, was renamed Venetucci Elementary to honor the family’s legacy in 1985).

After Alfonso’s death, Blanche ran the ranch for 35 years, until Colorado Springs Utilities bought the property in 1972. For a while the Pikes Peak Community Foundation leased some of the land for birding tours, and the El Paso Sheriff’s Department also used it for training exercises. Today it primarily serves as training grounds for line technicians.