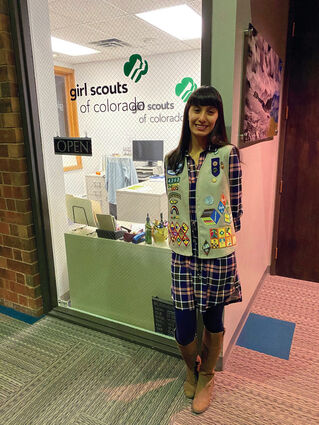 Faith Carino, a Security-Widefield resident and student at University of Colorado-Colorado Springs (UCCS), has become one of the first girls to receive the Girl Scouts of America Gold Award and the Boy Scouts of America Eagle Scout Award. Her Eagle Scout project was reviewed and approved the weekend of April 21-22, a little over a year after she got her Girl Scouts Gold Award in March 2020.

The Boy Scouts of America (BSA) announced they would start including girls in their programs in 2017, followed by a program in February 2019 that allowed girls ages 11-17 to join. Faith joined the BSA in March 2019, after discovering a new girls' troop (Troop 1911 chartered with American Legion Post 38) had opened up.

"I originally learned about the Scouting program from a friend of mine who was in my Girl Scout Troop," Faith said. "Her dad was running the troop my brother was in and he wanted to start up a girl troop as well. They needed another member to get the group started and they asked me if I would consider it. At first I thought I would only do them a favor until they found more members. After going out on a camping trip with them, I started to have a good time and my family encouraged me to actually participate and try earning some ranks. I continued and made my way through each of the ranks to eventually become an Eagle Scout."

Faith's mother, Shannon, described how proud she was of Faith for achieving this honor, especially along with other responsibilities. Faith took college classes at Pikes Peak Community College during high school, the same period where she was working for her Eagle Scout award and Gold Award. She ended up receiving an Associate of Arts degree in Communications at the same time that she graduated high school.

"Obviously, her dad and I are very impressed with her, even more when we started researching to find out how many girls had actually achieved both awards," Shannon said. "From what we could tell, there are only a few girls across the entire country that actually have both.  We both know how much work both awards took, and to accomplish them along with earning her AA in high school takes a lot of dedication on her part.   We are so proud that she kept with it, especially with all the challenges the last year has brought, and we really are excited to see what she does with this next."

The combination of attending both groups gave Faith a kind of cross-training that she found very interesting.

"Throughout the different merit badges I earned, I had the opportunity to try things I never would have otherwise," she said. "I went to one of the local unions to learn about plumbing and welding and had a chance to try welding for myself. At a summer camp I learned about climbing and how to self-rappel. My Scoutmasters taught me how to shoot a shotgun and I hit a clay pigeon out of the sky. The experiences I had while in the Scouting program were interesting and helped me realize how much I love the outdoors."

For her Eagle Scout project, Faith refurbished the community garden space behind American Legion Post 38. She weeded the space, repaired planters and tilled the soil so it would be ready for use in the spring.

"Our Scout troop is planning on using part of the space to complete their gardening merit badge, and the Legion has shared it with their members as well," Faith said.

For her Girl Scout Gold Award, Faith developed something a bit more complicated yet immensely helpful: a lending clothes closet for her high school music program.

"We had a very specific dress attire for concerts and festivals, and it was difficult for people that were constantly growing to continue to buy clothes each season," Faith explained. "The closet held concert attire of all different sizes that could be checked out, worn for the performance, washed, and checked back into the system."

While both projects required a great deal of determination and planning, Shannon thinks the time element made it more difficult to get the Eagle Scout project finished.

"Because of when BSA opened registration to female troops, Faith was definitely on a tight deadline to accomplish Eagle," Shannon said. "With her Gold Award, she had been aware of it since she had earned Silver and Bronze, so she had planned for that along the way.  With Eagle, she had so many specific items to ensure she met deadlines and requirements.  After COVID hit, a lot of those plans had to be reimagined yet again to make sure they could all still happen within the new health framework.  Whether it was hosting virtual campouts, teaching younger Scouts via Zoom, or looking into other councils to find merit badges she needed, she really had to take a lot of initiative to make this happen." 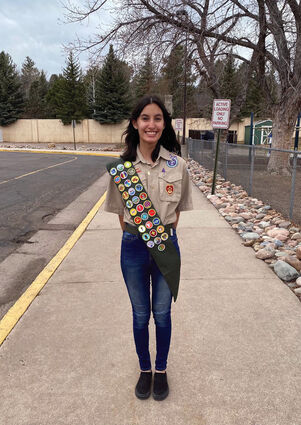 Faith Carino in her uniform after her final Board of Review for Boy Scouts Eagle Scout.

"I feel really honored to be one of the first girls to have both my Eagle Scout and Gold Award," Faith said. "It does take a lot of work to get here, but I hope that I can set an example of what young girls can achieve if they work towards it. I know that whatever comes next, this is something no one can take away from me. Knowing that I had limited time to complete my Eagle, and still was able to, is a great feeling and I think this will help me in the rest of my life."

Faith has been offered a position leading a BSA summer camp this year. To prepare for that role, she will attend the program's National Camp School in May.

"I will be in charge of the Roaring Lions section, which teaches young Scouts different skills in order to earn their earliest ranks," she said. "I think my experience as a Scout and earning Eagle will help me teach these skills, but also set an example to the younger Scouts, especially the girls, that they can also make it to Eagle."