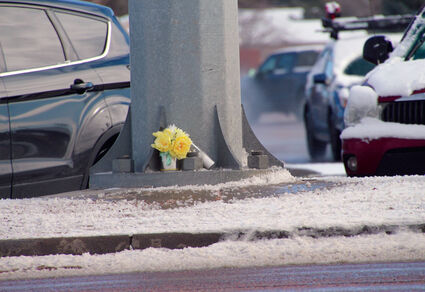 Flowers and other memorial items are the only sign now of the tragic accident that killed two children Saturday at Mesa Ridge Parkway and Fountain Mesa Road. The youths attended schools in Widefield School District 3.

It was a tragic weekend around the Fountain Valley community, with multiple accidents and crimes over the course of two days that left several people dead or injured.

Residents were shocked and saddened as word spread of a fatal vehicle-pedestrian accident at Fountain Mesa Road and Mesa Ridge Parkway just after 9 p.m. Saturday that killed two boys, ages 9 and 17 (earlier reported as 15). The 9-year-old's teenage brother was injured as well.

"Preliminary investigation revealed the juveniles were crossing in the crosswalk against the light," a Fountain Police Department (FPD) spokesperson said. "The driver remained on scene and did not appear to commit any traffic violations. The Fountain Police Accident Reconstruction Team will be completing the investigation and more information will be released as it becomes available."

"It's been an awful weekend," she said.

The district is not providing any other details out of respect for the families' privacy. However, schools where the victims attended did send letters to families to let them know that a loss had occurred and offered counseling. FPD confirmed that the victims were from two different families.

On Sunday afternoon, FPD announced it was investigating a body discovered in Fountain Creek just north of the Fountain Creek Regional Park near Duckwood Road and Hwy. 85/87. An individual called in the report around 2:30 p.m.

Although there were no obvious signs of trauma, the investigation would continue pending autopsy results and identification of the adult male.

Anyone with information about this incident is asked to call Detective Robyn Abrams at (719) 382-4289. To remain anonymous, contact Crime Stoppers Tip Line at (719) 634-STOP (7867) or http://www.crimestop.net. If your information leads to a felony arrest, you could be eligible for a cash reward.

Around 5 p.m. residents in the Painted Sky neighborhood in Security began calling in reports of gunshots to 911. El Paso County Sheriff's deputies responded to the 4800 block of Spokane Way to investigate and found two people, each with single gunshot wounds, on scene.

"Both were transported to a nearby hospital; one succumbed to their injuries while at the hospital, and the other had non-life-threatening injuries," an EPSO spokesperson said.

Around 9:30 a.m. Monday, EPSO announced it had arrested the suspect, 18-year-old Kamrin Long, on the charge of first-degree murder.

Anyone with knowledge of this incident or information that may be important to this case is urged to contact EPSO's Investigations Tip Line at 719-520-6666.

The fatally wounded victim has been identified by his family as 18-year-old Isaac Garcia, who was just weeks away from graduating from Mesa Ridge High School. Although EPSO could not confirm the ID as of press time Tuesday, Isaac's parents said they expected the coroner's report to be completed later that day.

"He has the best heart, always wants to help somebody," said his parents, Antoinette and Jose Garcia. "He loves his family."

This newspaper featured young Isaac back when he was 11, showcasing his act of community service when he made Christmas cards for Fountain firefighters and police officers to let them know how much they were appreciated. At the time, his grandmother Susie Turner told News staff that "after finishing his homework Isaac showed her the cards he had made and asked if he could put them in this newspaper, so that the emergency responders would see them."

A memorial fund has been set up with ENT to help the family. To donate, visit ENT in person and ask for the Isaac Garcia Memorial Fund. In addition, Cross Creek Church members are rallying around the family with meals and support.

The other person who was shot has not been identified.

Meanwhile, back in Fountain, police officers responded to Mesa Ridge Parkway and Fountain Mesa Road around 8 p.m. Monday for a report of a man shooting at vehicles.

FPD officers located the suspect vehicle, which was still occupied, and they performed a high-risk traffic stop and took the driver into custody without incident. Spent shell casings were found in the suspect vehicle along with a semi-automatic handgun. 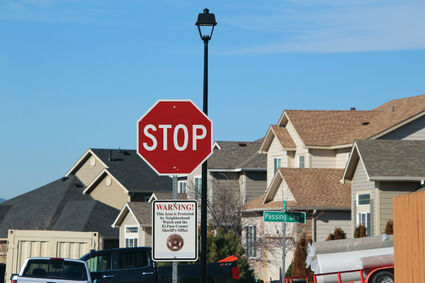 Residents in the Painted Sky neighborhood in Security first reported gunshots around 5 p.m. Sunday. The shooting took place on Spokane Way, just a short ways inside this entrance to the neighborhood.

The suspect has been identified as 32-year-old Kristian Guerra. He has been booked into El Paso County Criminal Justice Center on the following charges: felony menacing, prohibited use of a weapon and reckless endangerment.

Anyone with information about this incident is asked to call Lt. Matt Racine at (719) 382-4244. To remain anonymous, contact Crime Stoppers Tip Line at (719) 634-STOP (7867) or http://www.crimestop.net. If your information leads to a felony arrest, you could be eligible for a cash reward.

UPDATE: Friends and relatives of the families of two boys killed while crossing the street Saturday night are raising funds for the families' expenses. To support them, please visit: