Cleanup not just a one-day effort 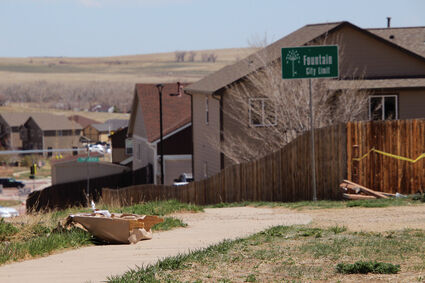 This couch has been abandoned along Sneffels Street just north of the Fountain city limit for several months now.

With Great American Clean-Up Day behind us, the problem of litter continues. Litter is not only a dirty business, but it can be a shocking business when one looks at the things people throw out in public areas. Juan Flores, who supervises the Neighborhood Services Division for the city of Fountain, said that over the years his team has found everything from gasoline containers to a full dining room set (four chairs included) on the side of the road.

"Couches, TVs, we've pretty much seen it all," Flores said. "It's a big problem in Fountain."

The problem is particularly noticeable on streets with low lighting and minimal traffic, such as Squirrel Creek Road east of Fountain and Syracuse Street in Widefield. The city of Fountain has several municipal codes in place to deal with littering. Code 8.04.040 makes it illegal to store debris on public or private property, and Code 9.24.090 prohibits littering on public or private property. If someone is caught littering in public or private property, city authorities can cite them and take them to municipal court. Offenders can be required to clean up the litter or reimburse the city for any costs that Neighborhood Services had to pay for their employees to clean up the problem. On top of the reimbursement, offenders can be fined up to $1,000. This is similar to the state of Colorado's littering fines ($20-$500 for first conviction, $50-$1,000 for second conviction and $100-$1,000 for any subsequent ones), which also apply to unincorporated areas of El Paso County.

Unfortunately, much like trying to track down which pet owner left pet waste on a sidewalk, it's rare to get clear evidence of who left the litter after the fact. Flores said that authorities do whatever they can to uncover who left the litter. Sometimes finding receipts or used phones in the litter helps them track down the culprit. Much of the time though, the best Neighborhood Services can do is clean up afterward. Where private property is concerned, it becomes the property owner's responsibility to clean up the litter.

Where public highways are concerned, cleaning duties can be covered by El Paso County Department of Public Works' Highway Division. People can submit service requests (including where the litter is located and how much of it) by using the county's Citizens Connect page (citizenconnect.elpasoco.com), and then the county will categorize the request and select a time to complete it.

Even though different groups are set up to clean litter and do their best, the cost of cleaning up adds up considerably over time. Flores estimated that the local landfills charge $8-10 for picking up a single tire, and $20-25 to dispose of a couch. To save money, Neighborhood Services often relocates litter to disposal bins, which a service empties once the bins are filled. The cost of emptying a full bin is $300-400. These estimates do not factor in the cost of manpower and travel – Flores said a typical clean-up job requires two to three Neighborhood Service employees, who must be paid and also have to commute from the clean-up site back to the disposal bins.

Given all these costs, citizen-led cleaning efforts provide a much-needed remedy. Each Neighborhood Services employee has an area that they are encouraged to look after and organize cleaning efforts within, and Flores is a big fan of community groups that clean up roads and parks.

"That's a huge value," Flores said. "I've worked with a lot of projects over the years."

Clean Up Fountain is one such group, which regularly schedules clean-up events around the city. They will host an event at Cross-Creek Park on May 16, and one at Fountain Creek on June 13. You can find out more on their Facebook page (facebook.com/groups/945997075794860).

Another group is Great American Clean-Up/Pikes Peak Partners (GACPPP), which organizes clean-ups in several sites through the Colorado Springs and Fountain Valley area during Earth Week. The city of Fountain and El Paso County help to sponsor GACPPP, which hosted its clean-up day on April 24 this year. To find out more about GACPPP or to register for one of its events, go to gacppp.com.

Churches, school groups and other community organizations can also agree to regularly clean a section of public roadway. El Paso County's Adopt-a-Road program involves people agreeing to pick up litter from both sides of a 2-mile stretch of a county road at least four times a year. Find out more at publicworks.elpasoco.com/adopt-a-road. Similarly, the Adopt-a-Highway program run by Colorado Department of Transportation (CDOT) asks that groups adopt a section of highway that is 2 miles long, and clean it at least four times a year (depending on the selected section, it may be less than 2 miles or only need to be cleaned twice a year). To find out more, go to codot.gov/programs/adopt-a-highway.