Dancing with the Greater Sage-Grouse 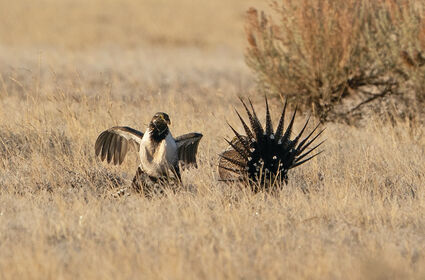 Around in circles the boys go.

I have always wanted to watch the sage grouse dance during their spring mating rituals. Recently a friend who lives in northwestern Colorado took me to a location where the greater sage-grouse were putting on a morning show on dancing grounds (referred to as a "lek").

The first day I went to see them, the fun was almost over. I got to the dance too late. On my second trek I arrived earlier, just before dawn. The full moon had not yet set and I could see the grassy clearing off in the distance, a flat open area surrounded by sagebrush. A snowcapped mountain served as the backdrop to this staging area. I wondered what brought these birds back to this location every spring. I imagined swirling energies rising high into the air, calling generation after generation to this dancing ground.

It was a chilly morning, so I watched from my car until the first rays of sunlight reached the earthen floor. Several dozen males strutted around, puffing out their chests and fanning out their tails like sunbursts. Even before sunrise, they started performing, demonstrating their skills to charm the females. For the most part, the girls were quietly gathered in a couple of groups, wallflowers keeping to themselves.

Every so often I would hear a drum-like beat. It came from the males. They puffed out their chests, inflating a yellow air sac on each side, drawing their shoulders back and their heads all but disappearing into their feathers. Then they would force the air out of these sacs, making a loud popping noise. This sound carries across the range and is part of what attracts the females, the invitation to join them on the floor.

Some of the more confident males who had danced on this floor before strutted towards each other. Their competitive moves varied, coming beak to beak then backing up, then into each other's faces once again. Sometimes they turned sideways or moved in circles before challenging each other again. Sometimes they fought with a flurry of flapping wings and feathers until one bowed in submission. They finished the scuffle on the dance floor rather than "taking it outside" away from the girls.

The more aggressive males competed for positions near the dance floor's center, where the females could see them better. The younger males appeared to be on the outer edges of the scene, puffing up and drumming by themselves or near another male, practicing for the day they might dominate the show. 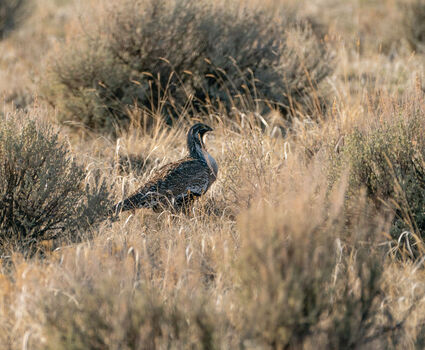 After a morning of watching the male grouse dancing, this hen wandered back into the sagebrush for the day. She will repeat this daily ritual until she picks a male to mate with. Females can lay between 6-13 eggs in a ground nest hidden under sagebrush.

An hour or two after sunrise, the females seemed to have decided they had watched the males long enough; the party was over. The girls walked off almost in single file back into the sagebrush or they flew off together. A few males followed the females; the others kept strutting around dancing by themselves or engaging with other males before they, too, called it a day. I couldn't help but smile and think about a few high school dances I attended years ago.

This ritual is repeated every morning for over a month depending on the location. After repeated mornings of watching the males, the females ultimately choose which one they want. Usually it is the top male or top few males who wind up impressing the watchful females and end up getting all the girls.

At the conclusion of these repeated days of dancing, the females choose their mate. After mating, the females go back into the sagebrush to have and raise their young alone.