To our Mother, with so much love 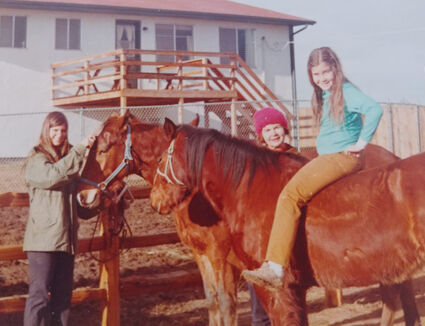 From left, Karen AuBuchon Johnson, Kathryn Wiese-Moore and Patty St. Louis share a special moment with the family's horses many years ago.

It is indeed an honor, in this special issue of the paper focused on honoring those superheroes among us who we lovingly refer to as our "Moms," to salute this newspaper's very own publisher/owner Kathryn Wiese-Moore, aka our Mom! While she has been in our lives from the very start, raising us to be independent, strong women, and she was active in the Fountain Valley community in various capacities over the years, some may not know her history at the newspaper.

It began when she fell in love with the paper's co-founder, Carl H. Wiese, over 40 years ago. The two were married in 1981, and soon the community came to know her as the lovely and cheerful lady named "Katty" who was so often at Carl's side. The two were very involved in the community; from helping out on Chamber of Commerce projects (like helping to build and paint floats for the annual Fall Festival Parade), to serving on the El Paso County Parks and Advisory Board. (Mom served in this capacity after we lost Carl in 1994, carrying on in his footsteps.) Carl was instrumental in helping to plan the Fountain Creek Regional Park and the many amenities we enjoy today. He and Mom often rode their horses along the banks of the creek, so they knew it in a very up-close and personal way. For this reason and more, the bridge that spanned Fountain Creek at the Hanson Nature Park area on the park's southern end was dedicated in Carl's honor not long after his passing. Mom and Carl often participated in the Fall Festival parades on horseback- dressed in matching outfits of turquoise and black, their horses also having matching saddles and bridles that were black and silver, looking so regal and proud. A few local residents who knew them once told me they looked like royalty, referring to them as the "King and Queen" of Fountain as they rode by.

Before Carl's death, Mom worked in civil service at Peterson Air Force Base, where she had served for a couple of decades. After his passing she retired and started joining us at the News office daily. It was such a pleasure to have her around. She became active with the Fountain Valley Optimist Club of which Carl had been a founding member, as well as other service groups in the area. I had the joy of joining her in much of this community service. She is beloved by so many who call our community home and consider her a friend.

My sister, Karen, shares Mom's love for horses. Karen was a teenager when she participated with Mom in the North American Trail Ride Conference (NATRC) competitive trail rides. They would ride 40-50 miles along trails in the mountains over weekends. Sometimes Dad and I went along to photograph and film competitors as they navigated obstacles they encountered riding through the rugged terrain. We had the luxury of getting around in 4-wheel drive vehicles.

Since we were kids, Mom and Karen rode in many horse shows and were active with a few riding clubs in the area; Mom and Carl also hosted trail rides along Fountain Creek. Mom was also a "Rangerette" mother when Karen was active in the well-known Pikes Peak Rangerettes equestrian drill team.

Now approaching 89, Mom still enjoys having her two horses (Raven and Eva) to love on and take care of every day (with Karen and her husband Ben's help). Occasionally, she still goes for a ride at the ranch in eastern El Paso County where she and her husband, Bob, have resided for several years now. Mom also loves to work in the yard and tend to her flower gardens.

Though mostly retired, she continues to provide leadership regarding newspaper operations; and beyond that- she continues to be the most loving, kind, gracious mother one could ever hope for! We consider ourselves to be so very, very blessed to have her in our lives. She has taught us so much about life, love, family, loss, surviving and the power of optimism and hope. There isn't enough space in this paper to express words of adoration, appreciation and praise for all she has done for us.

I'd say high up on the list of all that we are grateful for, is instilling in both of us girls her love for animals and nature and being in the great outdoors. Karen reminded me how when we were kids watching "Lassie" on TV, Mom would get teary-eyed when Lassie would find herself in trouble or something had happened to any of the animals on the show; and we would follow suit, tears falling from our eyes as well. Often we'd be clinging to our doggies while watching the show.

Mom and Dad often took us to the mountains to explore different areas of Colorado, from ghost towns to lakes and even the Great Sand Dunes- usually with our doggies at our sides.

I know my passion for animals, especially doggies, started with the first puppy (Alex) Mom and Dad got me for Christmas when I was a little girl. Being raised around animals was such a blessing and I've just about always had furry friends in my life. The same goes for Karen. It has taught us to respect life- all lives –even those of pets and wildlife.

Mom and Karen loved going on overnight camping trips, taking the horses, too. Mom would sleep in the truck cab and Karen on the floor of the horse trailer. Occasionally I went too, staying at camp while they rode off into the beautiful wilderness much like pioneers must have done long ago. 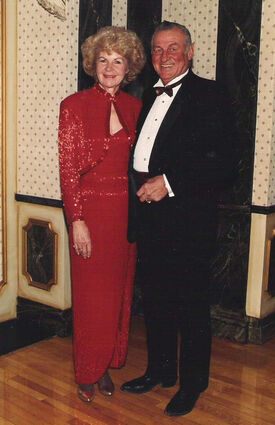 Kathryn Wiese-Moore and Carl Wiese, co-founder of this newspaper, are pictured above at an event at the Broadmoor many years ago. At left, Mom on one of her days here in the newspaper office.

Karen continually follows in Mom's footsteps answering the call of the wild, going on many adventures in our Colorful Colorado and beyond. She has become quite a skilled wildlife photographer as you have seen so often on our news pages, including the Wild Mustangs of Sand Wash Basin, whose plight she has championed for several years now.

Mom has truly led by example through so much of her life, teaching us through her own actions. We are definitely who we are in great part because of our dear mother. We have watched her suffer tremendous loss with grace and faith, just as we have watched her find deep wells of resilience within herself to keep hope for sunnier tomorrows alive... (and then enjoying them when they arrived.)

Thank you for a lifetime of love and inspiration, Mom, (from both of us). Our hearts find the most joy when we are in your company. We love you so very dearly!