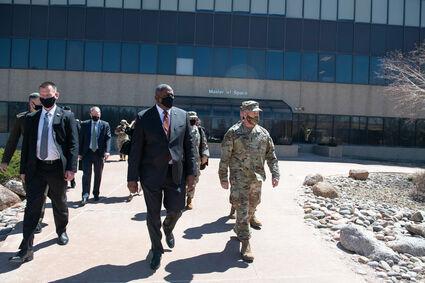 Secretary of Defense Lloyd J. Austin III departs U.S. Space Command with USSPACECOM Commander Gen. James H. Dickinson during a visit to Schriever Air Force Base on Thursday, April 29. Austin's visit came amid investigations by the DoD Inspector General and the Government Accountability Office into the decision to move Space Command from Colorado Springs to Huntsville, Ala. In January, the Air Force announced that Huntsville would be the permanent headquarters of U.S. Space Command. Following this announcement, reports surfaced that President Donald Trump had politicized the decision process to relocate Space Command from its provisional headquarters in Colorado Springs.

"Colorado Springs has been the epicenter of our national security space mission since 1985," said U.S. Senators John Hickenlooper and Michael Bennet in a joint statement. "We're glad that Secretary Austin is visiting to see Space Command for himself. We hope the visit will reinforce our view that Space Command will be strongest if it remains here in Colorado. In the meantime, we urge the Secretary to suspend Space Command's move until the investigations into political interference are complete."