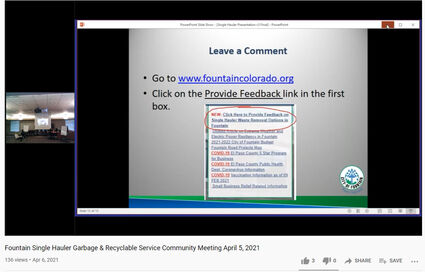 Snapshot from the April 5 public meeting on the single-hauler issue.

The city of Fountain is wrapping up its series of public meetings on the topic of switching to a single-hauler option for trash and recycling.

The final question-and-answer session is Wednesday, May 12, at 6 p.m. It will be completely virtual, and anyone interested may participate online by clicking on the green banner at the top of the city's home page, http://www.fountaincolorado.org.

"We still need lots of feedback, and people can visit the city website and click the link on the green alert banner at the top that says Single Hauler Waste Removal," said John Trylch, the city's communications manager. "That will take them to a page where they can watch both of the previous open meetings, read the Single Hauler Feasibility Study, and navigate to the feedback blog we have created for residents to provide their comments."

To date, 39 comments had been posted on that blog expressing a variety of opinions on the matter, with a split of about 50-50 for or against. Only a couple seemed neutral, and some in favor of a single-hauler added that they would prefer a locally-owned company to be selected.

A sampling of those comments:

"Most days of the week there are trash cans on the side of the road to navigate for pedestrians. They are an eye sore. I also believe a single haul system will reduce emissions from the waste removal trucks and it will reduce noise."

Meghan pointed out specific items included in the proposal, such as large item curbside pickup at least twice a year at no additional fee, that appealed to her.

"My current waste company does not provide that, and it would be great for most residents. Not to mention, my current company was recently bought out by another company. I wasn't consulted on that buyout or the change to my service. I don't see any difference between that and the city getting bids for a company citywide. It seems like most of the opposition to a single hauler concept is rooted in misinformation. I have lived in multiple cities outside of Colorado that used a single hauler system with no complaints from residents. It is streamlined and more efficient. There is less traffic on every street. My cul-de-sac has 10 trash and recycle trucks making rounds each week. It isn't necessary. I look forward to the city of Fountain government making the tough decision that is best for the city and environment, even if that means some residents will be unhappy temporarily."

Some residents fear that rates will creep up, despite the city's statement that lower rates are a driving factor in this potential move.

Peter said a single-provider model would pave the way for corruption in trash service.

'It will result in rate increases and reduction in service. Any time the government gets involved in free enterprise, it never ends up benefiting the citizens. It's just another way for the city to get their hands on more of your money."

The city doesn't deny that it is trying to generate revenue. The money is sorely needed to pay for street repairs, officials say. This is one way they are thinking "outside the box" as an alternative to a sales tax increase, which voters rejected in 2019.

A. Jordan claimed that the city of Manitou Springs, which Fountain has cited as an example in this proposal, has higher fees now than what it said it would when the program was rolled out there. A link to the recent fees and newer bid amounts for Manitou was included with that comment.

"Wake up people, don't let this happen!!! When has a government Federal, State or Local ever made something cheaper."

Felicia said that while she has come to understand the truck traffic part of the argument, she still prefers not to switch to a single hauler.

"The pandemic has given me the 'opportunity' to be home during the week. I honestly didn't know so many garbage trucks roamed the neighborhood on a daily basis. That being said, I still must agree with those who are against the single-hauler plan. I like the right to choose who I want to pick up the trash. I have a good relationship with my garbage man and I want him to continue being my garbage man."

Some in attendance at an April 9 meeting on the topic said they were concerned about so many garbage trucks driving up and down their street, especially with children outside playing. One resident said he usually prefers freedom of choice, but in this case safety was his No. 1 concern.

Several representatives from area waste companies participated in the previous meetings. Chris Pyle, of Waste Systems Inc., said he appreciated all the support from his customers who insist they want to retain WSI as their hauler. If given the chance to be the single hauler for Fountain, growing the fleet and all the necessary equipment would be "a challenge," he said. But if the city allowed for gradual build-up, "we'd make it work."

However, Pyle questioned whether the cost for customers really would be competitive after a company is locked in to a contract.

"Even if a national company comes in to do it cheaper, it's only going to be temporary," he said. "Once you're in it, it's going to climb and climb."

Other waste company representatives said large national companies would have an unfair advantage with their bids because they control the landfill and those tipping fees.

If the city proceeds with the proposal after the public meetings, the ultimate decision lies with the City Council. The matter could be put to a public vote, as some have requested; however, that is not the plan at this time.

Many other questions and answers were addressed in the previous two meetings. To view them before the May 12 Q&A session, click on the green banner on the city homepage, http://www.fountaincolorado.org.