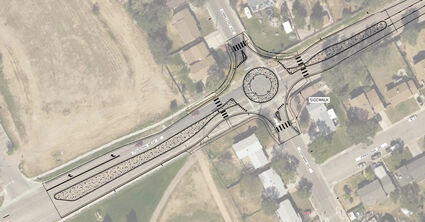 El Paso County is inviting neighbors around Fountain Mesa Road, Caballero Avenue and Fortman Avenue to attend a meeting where they will discuss a proposal to convert that intersection to a roundabout.

Located adjacent to Janitell Junior High and near the busy Mesa Ridge Parkway, the intersection has been planned for improvements for many years. Officials say traffic studies and analysis of traffic accident history within the corridor also support the need for the intersection improvements.

The county has been distributing fliers with the proposal to area residents. According to those documents, the recommendations include a roundabout, pedestrian crossing areas, drainage, lighting and restriping of Fountain Mesa Road north of the intersection to Fontaine Boulevard as one lane in each direction with a center left-turn lane and outside shoulders.

Although an early version of a flier said the city of Fountain is partnering with the county on this, city officials noted that the county is entirely responsible for the project. The city engineer and others have been staying in the loop during the planning phase and will continue to do so. While the city is supportive of some kind of improvements, it has no official position on this proposal, Fountain Communications Manager John Trylch said. Several residents have visited City Hall to comment on the plan, but the city has no authority on this matter and is only able to redirect them to the county, Trylch added.

Two of the four corner houses are in the city limits, two are in the county. Neighbors seem to have various opinions on the proposal so far. Some are adamantly opposed to a roundabout but affirm that the area needs some kind of safety improvements and ways to reduce speeding. They're just not sure a roundabout is the way to go.

The county's flier touts several benefits of a roundabout:

• The roundabout solution was selected as the preferred alternative because of how well it safely handles large volumes of traffic. The primary benefit of roundabouts from a traffic standpoint is the efficiency they can move vehicles through the intersection. Many more vehicles can be within the intersection at the same time when navigating a roundabout compared to a traffic signal.

• Along with reducing the overall number of traffic crashes, roundabouts eliminate left turn crashes which are one of the most severe type of crashes.

• Roundabouts are designed to slow vehicles down when traveling through the intersection so crashes that occur are at a low speed where serious injuries are not common."

Restriping is necessary for the following reasons:

• The primary reason for restriping Fountain Mesa Road up to Fontaine Boulevard is to improve safety as well as to harmonize/match up the lane configuration with the new lane striping at the intersection of Fountain Mesa Road and Caballero Avenue once the roundabout is installed.

• The restriping will reduce head-on collisions, provide room for a shoulder, and the center turn lane will reduce rear-end accidents by providing a safe refuge for vehicles turning left off Fountain Mesa Road north of the intersection.

Officials say the project – estimated at $2.4 million – is funded through El Paso County TABOR funds, and construction is anticipated to start this fall with tentative completion in late 2022.

Project Manager Brett Hartzell said the county does expect to need some right-of-way (ROW) for the roundabout.

"We've already begun meeting with the property owners at the corners to let them know of the project and the chance of property acquisition," he said. "Since our current plans are just preliminary, we haven't yet determined out exactly how much ROW we will need and from which parcels but this will be determined as we move forward with the design."

There are two opportunities for public participation: 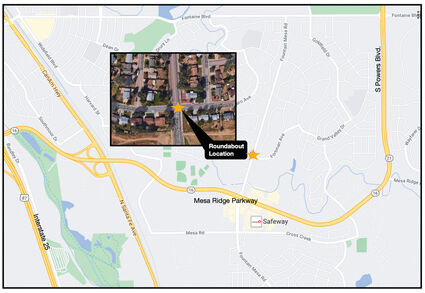 Pop-in Public Open House: Thursday, May 20, at Janitell Junior High, with several sessions between 4 and 7 p.m. The project team will be available to discuss the project and respond to questions. Sessions will be in small groups to facilitate social distancing. Those interested in attending should call in advance to schedule their arrival time: 719-339-4109.

Digital Public Open House: Online from May 20 to June 10, for those who would prefer to avoid in-person meeting. Log in to the virtual meeting anytime between May 20 and June 10 by visiting http://www.projectpublic.info/fountain-mesa