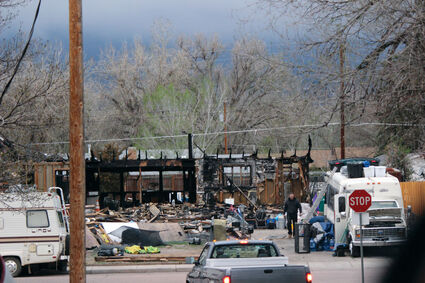 This photo, taken the evening of May 3, shows the property at 712 Widefield Drive still littered with debris after the Jan. 20 fire. Authorities posted a notice and security tape around the perimeter later that week, and reportedly told residents to leave.

A house directly across the street from Widefield and Discovery high schools has remained an eyesore for the last several months, even after a fire destroyed much of it.

Neighbors have reported that "it smells really bad over there" and that children have been observed "playing in that filth," according to one nearby resident. Motorhomes – some seemingly inoperable – continue to be parked around the property.

However, El Paso County officials report that they are making progress on their efforts to clean up the site once and for all.

At the time of the fire, the Department of Public Works was in the process of awarding a contract for the inspection. On March 1, the court approved the inspection warrant application, and the county was able to execute the warrant and have a contractor inspect the property.

"We received the final inspection report showing that the property located at 712 Widefield Drive does contain asbestos from the burned-out structure," Sosa said. "The consultant that conducted the environmental testing reported the findings to the Colorado Department of Public Health and Environment (CDPHE), as required. CDPHE responded with a recommendation to secure and stabilize the property with the use of fencing and poly-sheathing material to prevent the property from being further disturbed."

On April 22, an El Paso County District Court granted the county's Motion for a Preliminary Injunction authorizing the county to remove all people from the property and to secure and stabilize the property until it can be fully abated, Sosa added.

"The county is working quickly to secure and stabilize the property following the recommendations issued by the CDPHE," Sosa said. "Law enforcement has served the preliminary injunction and removed occupants from the property."

As of May 3, there did not appear to be any barriers around the property. Shortly after this newspaper's inquiry, there was a flurry of law enforcement activity on site, as well as placement of security tape and a notice.

"I'm glad they're actually doing something about it, especially right across from a school," one resident said. 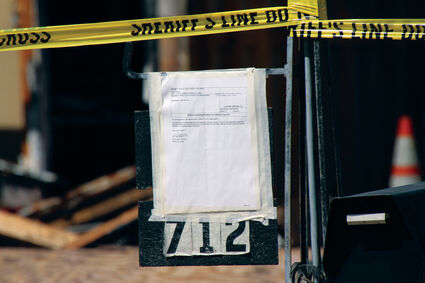 This court order granting the county's motion for preliminary injunction has been posted on the property at 712 Widefield Drive, along with police tape.

The property has been the subject of many complaints over the last few years. There have been claims of drug activity, homeless people camping out and more. The Jan. 20 blaze also was not the first fire at the house. In fact, the roof never was replaced after a previous fire severely damaged it in October 2017.

On June 30, 2020, a man living in the home claimed another resident shot him with a gun. Although the El Paso County Sheriff's Office said they didn't find evidence of a shooting, officials confirmed that EPCSO had responded to that address 128 times in the previous five years.

By that time, the county already had quietly initiated a legal process for possible condemnation or other resolution; however, officials acknowledged that such action takes a long time to accomplish.