Mesa Ridge students power through to get automotive certifications 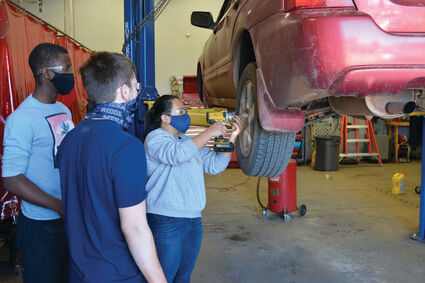 Students participate in the automotive program through Mesa Ridge High School. Students who take automotive classes at the Grizzly Garage learn skills that could lead to certifications or internships while still in high school.

On April 20, the following Mesa Ridge High School (MRHS) students passed the Automative Service Excellence (ASE) Brake A5 exam: Dominic Dytri, Caden McClements, Travares Lucas, Donovan Dubbs and Jonathan Duderstadt. This makes them ASE certified to perform brake repairs on vehicles. Carl Burgess, who works as counselor for MRHS, served as the proctor for the A5 exam. Tom Cutcher, who teaches automotive classes at MRHS, said a sixth student took the exam and missed passing it by a single question.

Cutcher said he was confident that student would pass the next time, and that he was proud of all of them.

"I stayed in the shop while they were taking the test, and as each one rolled in and told me they passed, I shouted 'Woooo!'" he said. "People probably though Rick Flair was in the shop, but I was really excited for the students because of all the hurdles they have had to overcome."

While MRHS has had shop classes for some time, Cutcher brought in the automotive class (also known as "the Grizzly Garage") two years ago. He described it as an attempt to change perceptions of shop classes and encourage important skills in students.

"I wanted to make the shop classes more than just a 'shop class,'" he said. "For years shop classes have had an image of being classes that are not as important as core classes. I really set out to change that and am still doing so. I always like to think of my courses as being life skills because the skills and experiences gained in this setting can and will be used for the rest of the student's life."

Over a year-long course, students learn about brakes, suspension and steering, electrical and engine design. Students who are willing to meet the qualifications can not only pass the course but take the A5 brake exam. Cutcher said since the Grizzly Garage started, he's had 10 students take the exam – an impressive feat given the effort involved.

"It takes a lot of work and studying outside of school to earn the certificate so it definitely is not for everyone, but to this date, 8 out of 10 have passed the exam," Cutcher said. "That 80-percent success rate is something that I am proud of."

Cutcher is also proud of the fact that he's seen diversity in the students earn their certifications, a trend that he's encouraged in the other Career and Technical Education (CTE) classes he teaches.

"CTE has a huge push to get more minorities into the skilled trades," Cutcher said. "For years the skilled trades field was dominated by Caucasian males, so I have been working hard at eliminating those barriers and getting those students more exposure to these types of careers that can help them support themselves and their families in the future. My entry-level courses are filled with a lot of different kids. Some of my best welders have been females. I am really excited to see that these students view these types of careers as a viable option for a career."

Since shop classes are inherently hands-on, it's been interesting trying to teach automotive skills in the midst of COVID. This year's program started with distance learning, and later had to shorten various lessons to accommodate schedule change and other setbacks.

"On top of starting the year in the distance model, I was quarantined four times because of exposure to students that had tested positive," Cutcher said. "One week we would have a plan and we were going to work on this, and then on the drop of a dime, an administrator would come in and tell me I had to go home for 10 days. That was stressful for me because I appreciate every moment I get to work with the kids, but I know it was frustrating for the students also."

On one level, the Grizzly Garage is part of an education movement to get high school students looking for and prepared for their careers even before they officially head off to college. Programs to help students earn college credit (such as the Colorado Early Colleges program started in 2007) are gaining popularity. Students who do homeschooling – such as Security-Widefield resident Faith Carino, mentioned in this paper's April 21 edition – have even more flexibility; Carino graduated high school with an Associate's Degree in Communication.

"I am all for career prep in high school," Cutcher said. "Our district has made a huge commitment to helping students enter the skilled trades. We have had students attend classes at Pikes Peak Community College [PPCC] while in school, and it has worked really well for them. I know two service techs that are really doing well because of the certifications that they earned while in high school. One had all of his diesel tech school at PPCC paid for, and the other has worked every day since graduating because of the ASE certification he earned at Mesa. I think we need to look at the pathways for high school students in general and ask some politicians to help eliminate some road blocks that are in the way for those who know what they want to do in life."

There is also a much-cited gap in skilled trades in the United States, with not enough people going into careers like carpentry, HVAC repair or welding. A 2019 Forbes article by Sarah Chamberlain, "Addressing the Skilled Labor Shortage in America," explained that part of the problem is few students hear about skilled trades, only about the option to go to college. As noted in this paper's April 14 article on the Rocky Mountain Lineman School, generational changeover also creates a gap in trade jobs which has to be filled with new recruits.

"Society as a whole needs to stop looking at shop classes or skilled trades as a fallback opportunity," Cutcher said. "There is nothing wrong with being a repair technician, welder, carpenter, electrician or plumber. Those people built this country, and as the infrastructure continues to deteriorate, those type of people are going to be in high demand again. They already are in high demand. Students should not feel bad or be discouraged when they say, 'When I grow up, I want to be a mechanic.'"

Cutcher also hopes that in the future, program changes will make it easier for high school students interested in skilled trades to get the hands-on training. 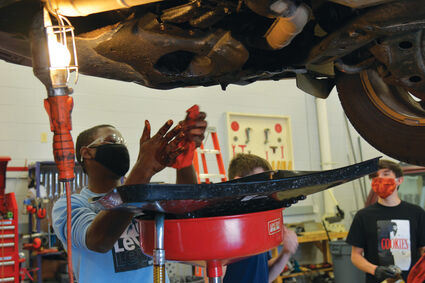 Students can't be afraid to get a little dirty while taking automotive classes at the Grizzly Garage at Mesa Ridge High School.

"Students that show a strong passion for the skilled trades sometimes have that passion extinguished because of the required core classes set in place," he said. "I would like to see some type of education model that allows students to be in the shop more often. I currently only get to see my students twice a week for 90 minutes. When we are in a good year (non-COVID) I only get to see them every other day for 90 minutes. So, a good week only includes 270 minutes of contact time. That is not enough time to instruct, learn and get to practice the repairs needed to be competent in the eight ASE categories.  I would like to see three-hour classes every day for the automotive students. This would allow them to grow even further than where we are at. My hope is that one day, when an employer is looking at an intern or potential repair tech from our school they would say, 'that kid went to Mesa Ridge, they have an excellent auto program, let's give that kid a shot over this other person.'"