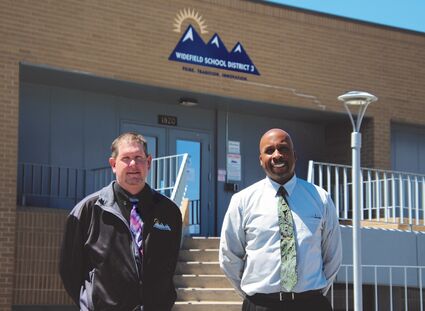 When Kevin Duren officially takes over as superintendent of Widefield School District 3 on June 1, he'll have some shoes to fill – shiny gold shoes perhaps, depending on the mood of outgoing superintendent Scott Campbell.

Campbell, who is known for his unique sense of style and often dresses in school colors when he visits different campuses in the district – like black and gold plaid with shiny gold shoes for Sproul Junior High – is retiring May 31 after 30 years in WSD3.

The two men have worked together in various capacities for about 15 years. In fact, both started their teaching careers at Janitell Junior High and have remained in the district ever since. They have a high regard for one another, and they share a positive outlook on the future of the district during this transition period and beyond.

"He's going to do great," Campbell said of his successor.

Campbell announced his upcoming retirement last fall, and the Widefield Board of Education began reviewing internal candidates to fill the position. Duren was one of the top two finalists. The other, Kirk Vsetecka, is the WSD3 executive director of human resources.

During the transition, Vsetecka will become the new assistant superintendent. He replaces Joe Garrett, who has been with the district for about three decades and is retiring also. Aaron Hoffman, principal at Widefield High School, will assume Duren's current job as executive director of secondary student learning and math achievement.

"We're doing some readjusting of roles and responsibilities to even the load," Duren said.

Duren grew up as a military brat and joined WSD3 as a third-grader at King Elementary when his father ended up here for his last duty station. He went on to attend Janitell Junior High and Widefield High School, graduating in 1987.

He attended several colleges including Colorado College, University of Oklahoma, Pikes Peak Community College and Colorado State University, dabbling in various subjects before settling on a bachelor's degree in math and a minor in computer science. He also served in the Air Force Reserves for several years.

"I have a minor in pretty much everything," he joked.

In 2014, Duren moved to central administration as the Executive Director of Secondary Student Learning and Math Achievement.

The move to administration was not planned. Duren credited former Superintendent Gene Cosby with the idea, which was brought up when Cosby asked Duren if he'd ever thought about that type of role.

Shortly after their conversation, some opportunities opened up and Duren ended up working closely with Campbell.

"It's been a match made in heaven ever since," he quipped.

Campbell and Duren said they both learned so much over the last year, proving the district is capable of enduring and growing despite the extreme challenges of COVID-19.

"We've been forced to do things in education that we thought were impossible," Campbell said.

They are optimistic next fall will be much different than the pandemic-plagued fall of 2020. In the meantime, they helped plan a summer program designed to keep students engaged in learning and avoid learning loss caused by the lost in-person time over the last year. They asked teachers to develop "some of the coolest classes they could teach," and the result was the Summer Enrichment Academy – a free program for grades 6-12 with more than 30 courses in topics as varied as squid dissection, improv comedy, construction basics and cooking.

WSD3 has also expanded on this year's online experiences to offer D3 My Way -- an existing online alternative – to a fully virtual option for K-12 students who prefer that method.

And while the district continues to work toward "normal" class settings in the fall, these men admit the future growth of the district is always on their mind. With significant population growth in recent years, and no end in sight, they say district officials are fully aware that new schools are needed to accommodate more students. The newest campus, Grand Mountain School, pretty much maxed out after its first year.

"We will catch up; we will be able to accommodate all the new sections of Widefield that used to be hills and valleys that are becoming homes," Campbell said.

However, business growth – like the huge Amazon project near the Colorado Springs Airport – will gradually and indirectly boost the district's finances. The larger tax base won't funnel money directly into the district's accounts, but it will give the district better borrowing power.

Campbell and Duren said WSD3 will continue to expand innovative programs such as The MiLL, a vocational training school, that Campbell is credited with growing.

"Scott was a huge part of why we have the MiLL and alternate career paths like construction and welding," WSD3 Communications Director Samantha Briggs said. "That wasn't by accident – it was Scott driven."

Campbell explained that he wanted WSD3 students to have the same opportunities as students in more affluent districts, which led to the engineering pathway for all ages.

"We wanted something for those kids that college wasn't going to be their thing, and the ability to make a good living," Campbell said. "Making bird houses wasn't going to cut it, so we went large."

Now, the MiLL – which partners with several districts in the region to provide hands-on training for students – has gained significant recognition and awards from state groups for its impact.

Duren seems cut out for leading such endeavors, as some of his hobbies lean toward the "nerdy," he said.

"One of my nerdy hobbies is I have my own little maker space in my basement," he said, explaining that it's normal for him to have robotic autonomous cars all over his house.

As for Campbell's retirement plans, first on the list is, "harass my wife to no end," he said. He'll also spend a lot of time with the rest of his family and visiting relatives across the United States.

And though Campbell clearly sees eye to eye with his successor, he states Duren will bring his own touch to the role of superintendent.

"I think Kevin's gonna do Kevin," he said.