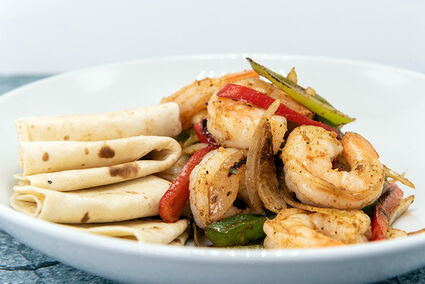 Fajitas were invented by the vaqueros and cowboys of the Southwest and northern Mexico. During cattle roundups, they were given the less-desirable parts of the cow (the head, hide, entrails and meat trimmings such as the skirt steak) as part of their weekly pay. From these discarded scraps, the cowboys created dishes like barbacoa de cabeza (head barbecue), menudo (tripe stew) and the fajitas/arracheras (grilled skirt steak) that have become so popular on modern menus.

Fajita is the diminutive form of the Spanish word "faja," which translates to "belt" or "girdle" in English. The word was commonly used by butchers along the Texas/Mexico border and refers to the diaphragm muscle of a steer.

Traditionally, fajitas were created to make use of skirt steak, the long, flat cut of beef steak from the belly of the cow. Skirt steaks are usually marinated and braised over low heat to make them palatable. The meat should be sliced across the grain and into thin pieces to ensure that the meat will be tender.

Fajitas have become a traditional part of Tex-Mex cuisine in the Southwest and have gained popularity nationwide. Texas restaurants typically serve the grilled beef on a sizzling hot, cast-iron platter full of grilled slices of onions and bell peppers, along with a stack of flour or corn tortillas, shredded lettuce, sour cream, guacamole, salsa, pico de gallo, cheese and tomatoes.

Fajitas are typically made with skirt steak, but any type of meat can be used, including chicken, pork, shrimp and all cuts of beef. I like to serve my vegetarian friends a grilled "veggie" fajita, or change up the recipe by using grilled seafood.

For a memorable Memorial Day meal, try this delicious twist on beef fajitas using fish and shrimp. You also can season and grill your favorite vegetables as directed below and serve them on corn or flour tortillas with traditional fajita condiments.

1. In a small bowl, blend together the paprika, salt, garlic powder, onion powder, black pepper, cayenne pepper, thyme and oregano. Pour the olive oil and lime juice over the shrimp and fish, and turn to coat. Use half the spice mixture to season the shrimp and the other half for the fish.

2. Using a grill basket or other seafood-grilling device, grill fish and shrimp over medium coals for about 5 minutes, stirring shrimp occasionally and turning fish once. (If you do not have a grilling basket, make a small packet with foil, and poke small holes in the packet with a fork.)