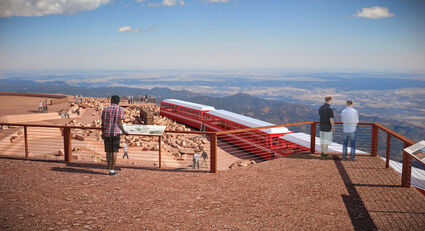 The artist's rendering of the rooftop view from the new summit facilities on Pikes Peak. The new visitor center should be open by June 30.

The new Pikes Peak Summit Visitor Center is on track to open in June 2021, pending weather and final construction activity. Due to the uncertainty of weather conditions on the summit, the official opening day will be announced at a later date. Also, due to spring weather delays that have impacted the construction schedule, the summit itself will remain closed to vehicular and pedestrian traffic until June 15, instead of May 23.

"We are all anxiously awaiting the opening of the new Summit Visitor Center and reopening of the summit, and we understand that extending the summit closure is an inconvenience for visitors who have planned and are expecting to be able to visit the summit of Pikes Peak," said Jack Glavan, Pikes Peak – America's Mountain manager. "We thank visitors for their patience as we work to complete the project. Until we can open to the summit once again, Pikes Peak – America's Mountain will continue to offer a 20% discount on entrance fees for guests."

During the summit closure and weather permitting, Pikes Peak Highway visitors can park at Devils Playground (13,500 feet) and hike various trails. Hikers are not able to access the summit and must be prepared to hike back down either the Crags Trail or Barr Trail. Signage indicating the temporary summit closure is present on both trails. During this time, heavy equipment will be moving boulders throughout the site in preparation for final grading and paving.

When the summit reopens, parking is expected to be limited; therefore, Pikes Peak – America's Mountain is working to provide a limited shuttle service from Devils Playground to the summit beginning June 15. Additional information regarding the shuttle will be announced once details are finalized. As always, plan ahead and call 719-385-7325 for current highway conditions. Hours of operation and other information about the highway can be found at PikesPeakColorado.com.

Local, state and U.S. Department of Agriculture Forest Service leaders will be present for a ribbon cutting ceremony to commemorate the opening of the new building on June 30, although the building itself may open to the public before that date. The co-hosted celebration will also recognize the 130th anniversary of The Broadmoor Manitou & Pikes Peak Cog Railway. The Cog Railway reopened May 20 to the public.

The new Summit Visitor Center, which replaces the 1964 Summit House, has been under construction since June 2018. Currently, progress is being made on completing the new building, demolishing the old Summit House and preparing the site for visitors. Final inspections, including health and life safety, must be completed before the concessionaire can begin stocking food and merchandise. The new building will open in phases, so early visitors can expect to see final construction work taking place and finishing touches being made to the interpretive exhibits when the building opens. Exterior site work is expected to last through September.

In addition to the breathtaking views, made even more dramatic by the new elevated pathway and overlook designed to help protect the summit's fragile tundra, guests can expect fresh menu options and digitally interactive displays that bring the history, significance, and geology of the mountain to life. The entire site was also designed to meet the latest Americans with Disabilities Act (ADA) standards.

The building is being constructed by local contractor GE Johnson and was designed by Baltimore-based GWWO Architects in collaboration with RTA Architects of Colorado Springs as architect of record. It also incorporates input submitted by hundreds of Pikes Peak-area residents between 2015 and 2017. It was designed to achieve Leadership in Energy and Environmental Design (LEED) Silver certification, a globally recognized symbol of sustainability achievement. The design also strives to achieve the Living Building ChallengeSM (LBC), a two-year certification process, as a highly sustainable, net-zero energy building. Sustainable design aspects include energy, materials, resilience, site ecology, site water and wastewater. Currently, no other buildings in the state are fully LBC certified.

The Summit Complex, expected to cost $65 million, is funded in part by reserves from Pikes Peak – America's Mountain, an enterprise of the City that generates revenue through toll fees and concession sales, and revenue bonds taken by Pikes Peak. From the beginning of the project, there has been a $15 million fundraising goal from public and private donations. At this time, $12.7 million has been raised toward that goal. No general fund tax dollars have been used. Sponsorship opportunities are available, though limited.

Throughout the closure and weather permitting, Pikes Peak Highway visitors will be able to park at Devils Playground where they can enjoy views from 13,500 feet and hike various trails. Hikers will not be able to access the summit and must be prepared to hike back down either the Crags Trail or Barr Trail. Signage indicating the temporary summit closure will be present on both trails.

Plan ahead and call 719-385-7325 for current highway conditions. All access is weather permitting; no refunds.

The Broadmoor Manitou & Pikes Peak Cog Railway, owned and managed by The Broadmoor, reopened May 20 to the public.

For information on the cog railway, visit Cograilway.com .