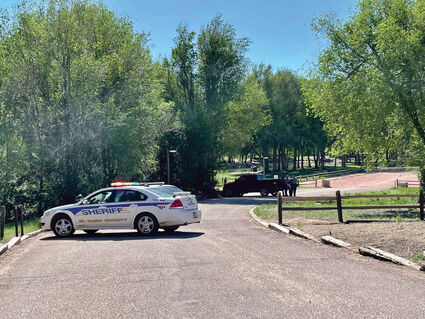 A vehicle theft suspect armed with a gun ran from the Love's Country Store across Fountain Creek to Willow Springs Ponds on Monday afternoon. Authorities spent several hours trying to negotiate with him, and ultimately the suspect was shot by a deputy.

UPDATE: The suspect (still not named) has since been released from the hospital, according to a law enforcement source. The incident apparently did not begin with a vehicle theft, as stated by an officer very early during that situation. The armed man was involved in a shooting with a relative in Fountain prior to the encounter with law enforcement at the Love's Travel Stop and subsequent standoff at the ponds, according to the source.

An hours-long standoff with an armed suspect at Willow Springs Ponds ended Monday evening when a deputy shot him.

The unnamed man was taken to a local hospital with life-threatening injuries, where his condition was unknown as of press time.

The situation began around 3:30 p.m. Monday when Fountain Police officers investigating vehicle thefts found a stolen vehicle - and the suspect - at the Love's Country Store off Bandley Drive.

Lt. James Vidmar, an El Paso County Sheriff's Office spokesman, said an EPSO deputy also happened to be on the property when FPD made contact with the suspect, who quickly appeared to act in a threatening manner, armed with a handgun, before running off in the direction of the ponds.

EPSO's Tactical Support Unit arrived to help. The unit is made up of the SWAT Team, Crisis Negotiation Team, Tactical Emergency Medical Service (TEMS), and K-9 Team. Authorities evacuated the park of visitors, and secured a perimeter that included a stretch of Mesa Ridge Parkway from Hwy. 85-87 to I-25. The closure caused detours and backups on I-25 in particular for a few hours.

"I do believe he did have to cross Fountain Creek to get from the Love's travel center to the park," Vidmar said.

FPD Chief Chris Heberer said officers on scene were most concerned about the suspect's actions and whether they could prevent him from harming himself or one of them. A witness near the scene described a tense scene, telling reporters that the suspect repeatedly held the gun up to his own head.

"During the negotiations numerous attempts to deescalate the situation were made," he said. "This included the use of less-than-lethal munitions."

Ultimately, an EPSO deputy fired at least one shot that struck the suspect. With numerous fire trucks and ambulances on standby, responders rendered aid immediately and then transported the suspect to a hospital.

No one else was reported injured in the ordeal. Shortly after the conclusion of the standoff, Vidmar said he could not yet say for certain whether the suspect attempted to shoot at officers.

As per protocol when an EPSO deputy is involved in a shooting, Colorado Springs Police Department has taken over that investigation. The deputy has been placed on administrative leave.