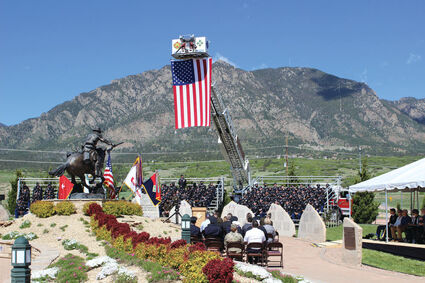 Fort Carson honored two fallen soldiers in a ceremony May 27 at the Mountain Post Warrior Memorial in Kit Carson Park.

Fort Carson honored two fallen soldiers in a ceremony Thursday at the Mountain Post Warrior Memorial in Kit Carson Park. This is the 18th annual ceremony at the memorial, and this ceremony honored Master Sgt. Michael B. Riley, 10th Special Forces Group (Airborne), and Sgt. Maj. James G. Sartor, 10th Special Forces Group (Airborne), both of whom died in 2019.

Maj. Gen. Matthew W. McFarlane, the 4th Infantry Division and Fort Carson commanding general, gave a keynote address. He thanked everyone for coming, including the "Gold Star Families" who are family members of fallen soldiers.

"I'd also like to specifically thank our first responders who are here today," he said. "You serve our community in our families each and every day throughout the year... Thank you for what you do to keep our families safe, and may we look forward to better days ahead as we continue to fight the pandemic."

McFarlane gave a general history of Memorial Day, referring to its roots in Decoration Day, which began in 1868 to honor Civil War veterans by placing flowers on their graves.

"We should not only remember those who died in the service of their country but also renew our pledge to aid and assist those whom they have left among us," McFarlane said. "It is also time for those in uniform to reaffirm or commit to selfless service by honoring the memory of those before us."

McFarlane asked Gold Star Families to stand, and he thanked them for coming and told them how aware he was of all they had given up.

"We are inspired by and mindful of your sacrifice and grateful for your continued service to our community," he said. "We owe a debt of eternal gratitude to you all."

McFarlane described the Gold Star as something given to soldiers who had died during military operations, and talked about the particularly tense combat operations period that followed 9/11. The memorial was created in 2004, three years after those operations started, and includes 10 stones with names of fallen soldiers on them. The center stone includes a quote by then-President George W. Bush given to a joint session of Congress on Sept. 20, 2001. 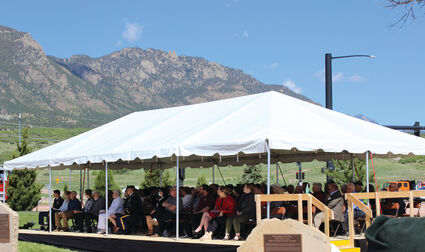 A group of Gold Star Families, who had family members killed in military operations, were present at the event.

"These stones tell the story of freedom better than words that even one of our greatest presidents or I or other speakers can provide," McFarlane said.

After saying a few words about Master Sgt. Michael Riley and Sgt. Major James Sartor, including summaries of their service and particular achievements, McFarlane read from the 1864 letter that Abraham Lincoln wrote to Lydia Parker Bixby, who had lost multiple sons in the Civil War.

The ceremony concluded with a prayer, the playing of taps, the audience joining in to sing "God Bless America," and a message of thanks to the Gold Star Families who attended the event. A second ceremony was held afterward to install a Gold Star flag at the Fort Carson Memorial Chapel, and a reception followed.