Good day. I pray all are well. This past Monday I was privileged to speak at the City of Fountain's Memorial Day ceremony and flag raising. Below is the text of my comments as keynote speaker, remembering those that have fallen while in military service to our Country. God bless you, and God bless America.

"Good morning, I want to welcome everyone to today's ceremony. On this day, across the country and throughout the world, Americans are gathering together to reflect on the courage, dedication and sacrifice it takes to serve our great country. As we remember, honor, and pay respect to those who paid the ultimate sacrifice so that we can live in freedom, we take time to reflect on their journey.

The journey of a soldier is one of sacrifice. As young soldiers, they are moved away from their loved ones and familiar surroundings to prepare for military service. They endure long separations from their families and uncertain futures during times of war. Our country's peacetime missions and training is also, often, a dangerous enterprise. It was and is during these uncertain times, that some do not return home.

Those who fight on distant battlefields are called to be a part of something greater than themselves. During extreme times, they responded in extraordinary ways. Today we honor and thank those who laid down their lives for our great country. To the family members of a lost loved one - mother, father, wife, husband, son, daughter - we share your grief. Nothing can ever fill the void left by their loss.

Here in El Paso County, we take pride in our military and respect our veterans and the heritage they've given us here. El Paso County is unique as the only county in the nation home to five military installations, Fort Carson, the United States Air Force Academy, Peterson AFB, Schriever AFB and Cheyenne Mountain Air Force Station. And I'm proud to say that over 100,000 veterans call the Pikes Peak Region their home. It is an honor that I am able to represent them in my capacity as a commissioner. 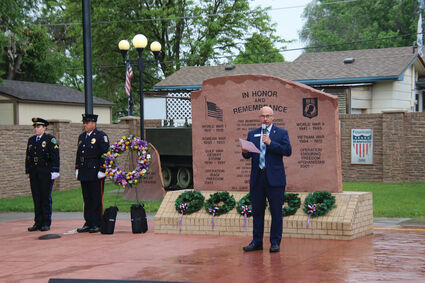 For myself, today I remember my friend and former co-worker Maj. Greg Stone, who was killed while deployed during Iraqi Freedom. I commemorate 1Lt Laura Piper, my fellow 1992 United States Air Force Academy classmate and regrettably, the first to perish from our class while she was in Iraq carrying out a United Nations relief mission.

I remember two additional former 34th Bomb Squadron mates of mine, B-1 pilots, who separately died while deployed for training just months apart in 1994, Maj. Morton Graves and Capt. Jon Rupp. No story is the same, but for each, their love for our country is forever evident, and forever etched in history by their passing.

And, for the so many, unnamed other service members, some who were known to attendees here today, or remembered by our ancestors, or our history books, or in our legends. Let us never forget those who gave the ultimate sacrifice for us and our country.

To conclude, and in commemoration of this day, I wish to thank everyone who attended. I ask God to bless you, your families, our troops, and the United States of America."