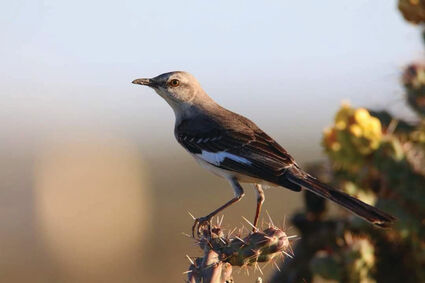 These Northern Mockingbirds can be found on the plains of El Paso County every spring, when they arrive for mating season.

This week, I did just that! I went out and mocked a Northern Mockingbird. Mock means to "mimic" (someone or something) scornfully or contemptuously, tease or make fun of. For me, that meant to play the songs of the Northern Mockingbird in an attempt to draw it closer so I could get a better picture. Mockingbirds are very territorial, so playing their call made it impossible for it to ignore me. Within minutes, I was being treated to an amazing flight show and territorial standoff.

Most of us think of mocking someone as a way to make fun of or tease another person. The Northern Mockingbird mocks for a different reason. Mockingbirds mimic the sounds of other birds to prevent them from moving into their territory. The Mockingbird may sing for hours. The constant varied calls make other birds believe that the area is over populated and prevents them from stopping and looking to nest. The Mockingbird can learn over 200 songs.

The Mockingbird's vocal cords (called the syrinx) can produce many different sounds. They will mimic mostly other birds, but they will also mimic the sounds of dogs, cats, car alarms or even a creaky gate. It is believed that another reason they mimic is that female Mockingbirds are attracted to the males with the most amount of calls it can mimic. During the mating season males will try to add new sounds and outdo the other males. They can sing out 30 different calls in just a minute. That was evident when I used calls to bring in this Mockingbird. As I played the call, it was clearly trying to out sing me.

Northern Mockingbirds come to the El Paso County area every summer for mating. They will start showing up and breeding in late March. They are very territorial and do not share their area with other Mockingbirds. If you find one, a pair will probably be the only ones in the area. If you catch them just starting to arrive for the migration, you may see a few in the same area. Once a male has picked its area, he will vigorously take it over. The reason they want to deter other species of birds as well as other Mockingbirds from nesting in the same area is simply to insure a good food supply. Mockingbirds are not a mean bird, they're just simply selfish.

Mockingbirds nest in shrubs and trees. The male will do all of the nest building. They prefer to nest low to the ground in shrubs, but nests have been seen as high as 60 feet. The male will be very busy building. In fact, he will keep building nests until the female finds one she likes. Once the female settles in to nest, the male can finally relax just a bit.

The Mockingbird can have two to three broods a season, and the female could choose a different nest for each brood. Each brood will have two to six eggs. Incubation is less than two weeks, and the young will fledge within a couple weeks of hatch. This process is very fast, so if you have a nest you are wanting to keep an eye on, you'll have less than a month to observe them. As soon as one brood fledges the pair will start the mating process all over.

Although Mockingbirds will nest in areas populated with humans, they seem to be easiest to find in large open fields with lots of shrubs, hedges and fruiting bushes. For me, I think it's because the sound travels better. Mockingbirds will run around on the ground but most of their time is spent sitting on the top of shrubs singing the day away. 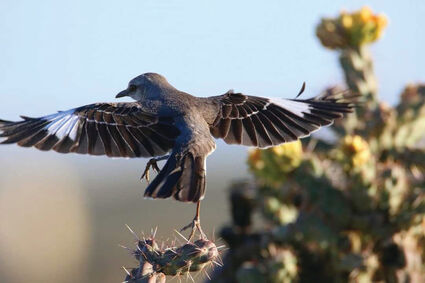 This mockingbird carefully balances on the needles of a cactus, an environment that provides the bird with protection from predators.

The Mockingbird in these photos was found in the eastern plains on the Cholla Cactus. Many birds love the cactus because it works great as defense against predators. Mockingbirds actually prefer cactus to build nests in for just that reason. If you can find big open areas with just a few cacti, there's a good chance that's where you'll find a nest.

Mockingbirds can easily be mistaken as a Loggerhead Shrike because of the grey and black colors but especially because of the white on the wing in flight. You will notice in one of the images the distinct white band with the wings spread open.

If you would like to find and observe a Northern Mockingbird, head out to the plains, leave the windows down and listen. Sit in one spot for a bit and try to play calls. If you see or hear nothing within a few minutes, move on. If they are out there, they will make themselves known. Good luck and happy birding!