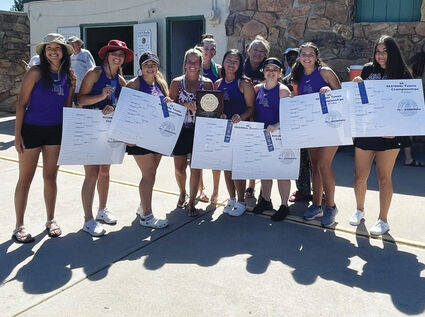 "All the girls came ready to compete, and that's exactly what they did," coach Lisa Felice said.

Going into the tournament, Mesa Ridge was seeded well. Dual-sport athletes Aubree Krupp and Ariadna Martinez, who play competitive softball year round, were seeded #1 at #2doubles. Alysia Benedict and Chris Valenzuela came in as a #2 seed at #3doubles along with Aolany Moreno and Brianna Ortiz at #4doubles.

Day #1 of the tournament, almost everyone won their first match, which guaranteed they would return to compete the next day - again, something that has never happened for Mesa Ridge girls tennis.

#2, #3 and #4 doubles all had a bye for their first round. They needed to win their only match of the day, and it would guarantee their place in the Championships and the road to State. All doubles teams played well and won to advance to the next day.

Day #2 was the championship match. #2 doubles and #4 doubles both beat Pueblo West in straight sets. #3 doubles had split sets and won the 3rd set to take the match against Canon City.

Jena Plattenberger won her 3rd place match to help contribute to the team points and is an alternate for the State tournament.

"What a great season of girls tennis for Mesa Ridge," Felice said. "We are so proud and excited for them to compete at the State tournament. It has been a weird season and difficult at times with seniors graduating, senior parties, school being finished, vacations, and just the lateness of the season. It is great to end on such a wonderful note. I am honored to have been part of their journeys and coach them this year."